Assassin's Creed Wiki
Register
Don't have an account?
Sign In
Advertisement
in: Articles in need of sources, Articles needing expansion, Individuals,
and 7 more

Ciara ingen Medba was an Irish poet who held the position of Ollamh Érenn during the late 9th century. She also served as an advisor to the High King Flann Sinna.

Ciara was raised as a wildly free child in the regions of Connacht, coming from a family of druid pagans who encouraged her whims and desires. Eventually, her parents passed down their beliefs and she was taught how to sing. As a child, she was taught stories and songs about the Lia Fáil, all of which concentrated on how it is brimming with beauty and divine powers.[1]

At some point she discovered a region in the mountains which she designated as her personal spot. When Ciara grew up, she had a very deep connection to the Gaelic pagan faith as well as the pagans scattered across Ireland who still practiced Gaelic paganism. It is for this reason that she joined the Children of Danu, believing them to be the key to maintain Gaelic paganism. However, after realizing the dark rituals and extremist terrorism the Children of Danu adhered to in hopes to revive their dying faith, she defected.[2]

It was for these peaceful native Gaelic pagans that Ciara decided to accept the post of Ollamh Érenn, the Bard of All Ireland. This gave her an equal social standing when compared to the High King himself. She put in a lot of effort to have Ireland as well as the native Druids fight for Flann Sinna, seeing that Flann not only recognized her as an an important asset to Ireland, but also decided to allow the pagans to practice their faith freely, without discrimination from the Irish Christians or Norse settlers.[2]

Ciara belonged to a bloodline of druids attuned to the Celtic Piece of Eden, the Lia Fail. Since only known humans that were able to activate the Isu artifact had high counts of Isu DNA or are connected to an Isu being. This fact seems to indicate that Ciara's bloodline was somehow linked to the Isu or had a high count of Isu DNA. [citation needed]

Ciara ingen Medba is a supporting character and later final antagonist created for the Assassin's Creed: Valhalla DLC expansion Wrath of the Druids. Her voice was provided by Julie Fowlis, who also did her singing.

In Assassin's Creed canon, Ciara is the Ollamh Érenn and was the original artist of "Flann over Ireland", an ancient ballad historically attributed to Máel Muire Othain, Flann's historical Ollamh Érenn who died c. 887. 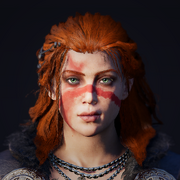