Chios is a Greek island located in the Aegean Sea. The capital of the island is the similarly named city.

The island is famous for mastic, the fragrant resin produced by the trees in the area.[1] Another product considered of exceptional quality is the wine produced on the island, available to wealthy citizens in places like Athens.[2]

During the 5th century BCE, the island was home to the Daughters of Artemis, a cult who worshipped the Greek goddess of the hunt, Artemis. The Spartan misthios Kassandra visited the island during the Peloponnesian War.[3]

In 1510, during his voyage to Masyaf the Mentor of the Italian Brotherhood of Assassins Ezio Auditore da Firenze had to stop off at the island of Chios after his ship faced a storm.[4]

The island of Chios was made up of three regions: 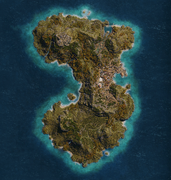 Map of Chios
Add a photo to this gallery

Retrieved from "https://assassinscreed.fandom.com/wiki/Chios?oldid=837215"
Community content is available under CC-BY-SA unless otherwise noted.