The Chimera was a fire-breathing creature in Greek mythology, an amalgamation of a goat, lion, and a snake. It was slain by the hero Bellerophon with the aid of Pegasos.

During the 5th century BCE, a member of the The Silver Vein branch of the Cult of Kosmos took up the mythical name, calling herself The Chimera.[1]

Another member of the Cult, Asterion of the Gods of the Aegean Sea, was the captain of the trireme, the Astraios, whose sails and finery of which had been emblazoned with the Chimera's likeness.[1]

Around 422 BCE, an Achaian engineer designed and developed a naval weapon which he named after the monster as Chimera's Breath, for like the creature, the weapon spewed fire.[2]

Sails and finery featuring the Chimera for the ship Adrestia can be found in the Smuggler's Shipwreck near Eretria in Euboea in Assassin's Creed: Odyssey. The image of the Chimera in said finery is based on a painting on a 4th century BCE kylix.

The image of the Chimera on the finery of Astraios is based on a painting on a 6th century BCE cup.

Homer included the Chimera in his Iliad.

The Chimera was also said to be one of the offspring of Typhon and Echidna, making it the sibling of mythical creatures such as Cerberus, the Theban Sphinx and the Nemean Lion. 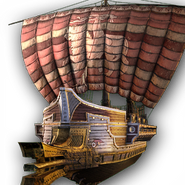 The sail bearing the image of the Chimera 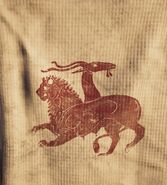 The ship design of the Chimera

The Astraios bearing the likeness of the Chimera

Retrieved from "https://assassinscreed.fandom.com/wiki/Chimera?oldid=856312"
Community content is available under CC-BY-SA unless otherwise noted.