"The Children of Danu have perverted their beliefs into a weapon."
―Ciara ingen Medba, Wrath of the Druids Expansion Trailer

The Children of Danu was an early medieval druidic cult that operated throughout all the petty kingdoms of Ireland during the Viking Age. The cult was infamous for its dark practices through worship of the Irish goddess Danu of the Tuatha Dé Danann.

Between 879 and 882,[3] the Children of Danu were systematically exterminated by the Viking jarlskona Eivor Varinsdottir of the Raven Clan.[4]

It is not specifically stated as to when exactly the Children of Danu were founded, but the order is quite old in its own right based on the timeline of Norse encroachment into ancient Ireland. Before the Norse beliefs and the Christian faith arrived, Gaelic paganism reigned supreme in Ireland through the druids, an elite, religious caste of individuals who reputedly possessed strange, mystical powers that enabled them to ensnare the minds of humans, transform themselves and others into animals, conjure powerful illusions, kill without lifting a finger, and even gaze into the past and future.[1]

When the Norse-Gaelic Christians began to spread their influence across Ireland and rapidly increased in number, many traditional practices, customs and beliefs of the druids began to be phased out to make way for the new systems. Some druids chose to passively retreat into the forests in the Irish countryside to live out their remaining days in solitude and keep their beliefs alive through taking apprentices. These apprentices were usually disenfranchised men and women from the Norse-Gaelic society in Ireland.[1]

Most adherents of the old ways, however, were not so submissive and were often mistreated, scorned and ostracized by the Norse-Gaelic Christians in Ireland, unwittingly engendering a climate of tension, hostility and dark intent. With the rise of the Christian order, the increasing influence of the Nordic settlers and the realization that Gaelic paganism was on the verge of facing extinction, many druids became enraged over the treatment they had received and resolved to fight back against the invaders by engaging in the more horrific and far darker aspects of Gaelic paganism. These extremist druids gathered together as one to unite their strength, work to drive out the Norse and Christian religions and re-establish the Druids as the principal faith of Ireland. They focused their new worship around the Irish goddess Danu and began delving into dangerous and evil practices previously viewed as unthinkable or forbidden by their pacifistic contemporaries; dark magic, human sacrifice, rituals to summon dark spirits, primitive chemical weapons in the form of toxic or poisonous mists, torture and necromancy.[1]

Calling themselves the Children of Danu, they began aggressively recruiting from among the most zealous, dissatisfied, or disenfranchised from the populace to serve as their spies, enforcers, and foot-soldiers. By the time Eivor arrived in Ireland, the Children already had hundreds of followers stationed across the entire country in numerous secret enclaves and hideouts where they conducted their dark practices, trained to fight and kill with coordinated attacks.[1]

Prior to 879, the king of Meath Flann Sinna, a descendant of the Southern Uí Néill line, declared his intention to claim the High Kingship of Ireland. A devout Christian, Flann was viewed as a threat by the Children of Danu despite his lack of animosity towards druidism. Abbot Eogan mac Cartaigh, secretly the leader of the Children, began to mastermind an elaborate plot to murder Flann and prevent the ascendancy of a pro-Christian High King and keep the petty kingdoms of Ireland at each other's throats, a situation which favored him and his followers. Though they planned extensively for the conflict to come, the Children were dealt a serious blow when Ciara ingen Medba, one of their most powerful druids, became disillusioned with their practices, left the cult and aligned herself with Flann as his court poet so as to ensure the continued existence of the peaceful druids and the destruction of the Children. Enraged, Eogan sentenced Ciara to death,[1] though as long as she remained in Flann's court, she was essentially untouchable. Undeterred, Eogan mobilized the Children of Danu across the length, width and breadth of Ireland and tasked his leading lieutenants with coordinating strikes, sabotage and terror-raids against Flann's territories and vulnerable fiefdoms.

The Children's fate and eventual doom, however, was sealed in 879, when the jarlskona Eivor arrived on the shores of Ireland at the invitation of her cousin Bárid mac Ímair, the King of Dublin. Not long after arriving, she and her allies foiled a pre-emptive assassination attempt by the Children on Flann on the Hill of Tara just prior to his coronation as High King. The Children then countered by stealing the sacrosanct Book of Kells as a warning to Flann, who tasked Eivor with retrieving the sacred text as a show of good faith on behalf of Barid. Eivor succeeded in locating the book by tracking the Druids back to their central lair in Tuam, slaughtering all within and plundering all the wealth stored there; she then delivered the Book of Kells back to the church.[1]

Incensed at the continual interference by the upstart Viking, Eogan and the Children decided to try a different approach. In the wake of Flann's successful assault on the fortress of Cashelore in Connacht, the druids secretly poisoned the drink of the celebrating soldiers but only those of Irish blood and bribed a thief to claim that Barid ordered him to do it so as to turn the Irish and the Danes against each other. Although Flann was not entirely convinced of Barid's supposed involvement, he insisted Barid remain at Cashelore with him while Eivor and Ciara set out to enlist the help of Ciara's druid mentor for a cure to the poison. While Ciara and her mentor Deirdre Na Linni worked on the cure, Eivor hunted down one of Eogan's lieutenants Niamh, murdered her, and claimed her amber fragment carried by all high-ranking druid cult members to use it in the cure.[1] Thanks to their efforts, the poisoned soldiers were cured and Barid was cleared of any wrongdoing.

The Turning of the Tide

The Children's setbacks did not end there however. Determined to root out the infestation, Eivor soon discovered the name and location of another high-ranking member cult lieutenant Sétnae, tracked her down, and butchered her and her subordinates in a bloody skirmish at the druids' sacrificial altar in Tuam, taking her amber fragment and looting all their treasure.

Wounded but still convinced that Flann remained oblivious to his true intentions, Eogan pressed on with his plans. The druids continued to launch raids and ambush strikes on the roads and against trading outposts and even managed to assassinate several high-ranking Irish nobles who supported Flann. The civilian population became inundated with wild and strange tales of being attacked by otherworldly monsters, mysterious green fog that killed any who wandered into it, demonic foes who could disappear instantly and reappear somewhere else just as fast and ghosts and phantasms haunting the woods and caves outside towns.

A few weeks after the fall of Cashelore, Eogan learned through his spies that Flann was making his move to secure the north of Ireland by bringing the two principal kings of the region Niall and Domnhall to heel. This presented a rare opportunity to the Children as it would bring Flann and his principle supporters within easy striking distance; in response Eogan immediately began secretly moving large numbers of soldiers and supplies toward Clogher in anticipation of striking against Flann's unprepared forces.

Blind to Eogan's movements, Flann allowed the Dublin king Barid to travel to the Ulster stronghold Aileach to negotiate with Kings Niall and Domnhall on Flann's behalf. When Barid failed to return, Flann dispatched Eivor to discover the reason behind Barid's disappearance. This move disturbed Eogan, who worried that Eivor would discover his illicit use of Aileach as a black-site prison for high-value enemies of the Children, which Aileach's kings were aware of, discover his intentions and warn Flann of the coming attack.

Wasting no time, Eivor made her way to Aileach and confronted the kings, with whom she also found Barid, drinking excessively and acting strangely. Eivor became convinced that something else was going on and searched Aileach extensively, during which she happened upon Eogan's secret prison and instigated a violent breakout of the prisoners, killing most of the guards in the process. Purging Aileach of the Children's loyalists and taking the kings hostage, Eivor and Barid forced them to admit their complicity with the prison and reveal Eogan's true nature as one of the Children as well as his plan to move against Flann's army with one of his own at Clogher. Eivor hurriedly rushed back to Clogher to warn Flann while Barid re-established order in Aileach.

Out of time, out of patience and out of options, Eogan and the Children had no choice but to go all in on their high-risk gamble and launch their attack against Flann. Purging the surrounding countryside of Flann's scouts, Eogan's army of druids, conscripts and mercenary contingents from across Ireland marched on Flann's forces encamped at Clogher and launched a massive surprise assault. The king's forces, though caught unprepared, fought back fiercely, led by Eivor, Flann and Ciara. After several hours of heavy fighting, the High King's forces finally drove back the abbot's army and forced them to withdraw. In the process however, King Barid was fatally wounded and died soon after, passing his kingship to his young son Sichfrith.[1]

Consumed with rage and fury over Eogan's betrayal, Flann summoned every last able-bodied soldier he had left in preparation for marching on on Armagh, the seat of the abbot's power. Meanwhile, Eivor struck back at the cultists directly; in a series of bloody attacks, several more of the Children's leaders fell in quick succession as Eivor systematically dismantled a major operation by the Children to smuggle weapons to their civilian supporters via a network of pirates.[1] Anticipating Flann's arrival, Eogan assembled the shattered remnants of his army in Armagh and prepared to make his final stand.

The High King's forces quickly broke through the city's defences and ransacked it while Flann and Eivor confronted the Abbot. Defiant to the end, Eogan revealed himself as the leader of the Children of Danu and exposed Ciara's past membership as a cultist, declaring that theirs was the only way Ireland would be great. His opponents ignored his boasts and promptly slew the Abbot in a short but vicious duel, decapitating the druidic cult's leadership and removing the last obstacle to Flann's ascendancy.[1]

With Eogan's death, the Children of Danu floundered wildly; mistakes were made and the remaining leaders were systematically wiped out by Eivor along with dozens of their subordinates. For good measure, Eivor also convinced Ciara to destroy the Lia Fáil, forever bringing to an end the dark dreams of the Children of Danu and by extension, cause the cult itself to split apart along its own fracture lines and eventually fade into history.[1]

The Children of Danu were formed as a violent, pagan resistance movement against the rise of the Norse and Christian faiths in Ireland, which had resulted in the native druidic faith of Classical Antiquity facing the danger of extinction. Fearing the replacement of their native Gaelic paganism, the high ranking members within the Children of Danu sought to acquire and use the power of ancient relics both in and out of their possession, such the Lia Fáil, in hopes to revive their beliefs and displace the encroaching foreign beliefs.[1]

The leader is marked with an asterisk. (*) 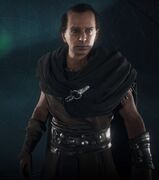 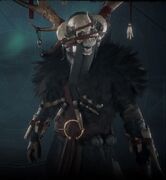 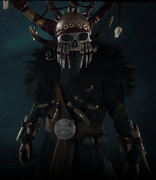 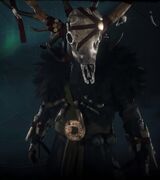 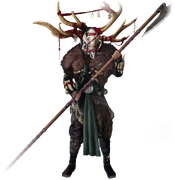 The Children of Danu is a faction introduced in the Wrath of the Druids DLC. According to Associate Narrative Director Hugo Sahuquet, the faction is not part of the Order of the Ancients.[5]