Assassin's Creed Wiki
Register
Don't have an account?
Sign In
Advertisement
in: Articles in need of sources, 1458 births, 1488 deaths,
and 8 more

"Caterina! Caterina Sforza! I know you're in there. I have something you may want back. Are you missing any children?"
―Checco taunting Caterina Sforza after kidnapping her children, 1488.[src]

Checco Orsi (1458 – 1488) was a member of the Orsi family of Forlì, brother to Ludovico, and a member of the Roman Rite of the Templar Order. Bored with their life in the countryside, the two brothers started a loan-sharking business, and murdered any who failed to pay their debts.

The brothers were hired by Caterina Sforza to kill her own husband, Girolamo Riario, after she found out that he was a Templar. Riario, who was already in debt to the Orsi brothers, was killed by them during a meal.[1]

Battle of Forlì and Death

Later on, Rodrigo Borgia hired them to kill Caterina and obtain the map Riario had made of the Codex pages.[1] The Orsi agreed, and laid siege to the city of Forlì. In the process, they captured two of Caterina's children, Bianca and Ottaviano, and found out that Ezio Auditore da Firenze, who was in possession of the Apple of Eden, was involved as well.[2]

Using the two as a distraction for Ezio, Checco attacked the Rocca di Ravaldino (the ward in which Caterina was holding the Apple) after the Assassin had left to rescue the children. Caterina and Niccolò Machiavelli's resistance was not enough to protect the Piece of Eden, and Checco claimed it for himself.[2]

Checco then attempted to leave Forlì in order to deliver the Apple to Rodrigo Borgia, but Ezio was able to locate and assassinate him before he could do so, claiming the Apple back in the process. However, with his dying breath, Checco stabbed Ezio in the right side of the stomach, severely wounding him and causing him to lose the Apple and spend an entire decade re-acquiring it.[2]

Historically, [citation needed] Checco and Ludovico were not known to have invaded Forli nor have any connections to the House of Borgia. They fled after they killed Girolamo Riario and disappeared into history afterwards.

In Assassin's Creed: Renaissance, a horse and carriage chase ensued between Checco and Ezio, though this does not occur in the game. 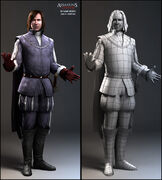 Checco (left) and Ludovico's portrait in the Villa Auditore's gallery

Checco with his brother, Ludovico