Assassin's Creed Wiki
Register
Don't have an account?
Sign In
Advertisement
in: Articles that need updating, Individuals, Isu,
and 4 more

Charon was an Isu, revered in Greek mythology as the ferryman of Hades who carried the souls of the dead over the river Styx to the Underworld.

Charon's brothers were Thanatos and Hypnos, and their father was Erebus.[1]

In a simulation created by the Isu Aletheia, Charon performed his duties as the ferryman of Hades, and met the Spartan misthios Kassandra after she'd slain Cerberos. Though derisively calling her a 'fleshling', Charon was still willing to help her, and had tasks for her as well. Charon informed Kassandra about the Armor of the Fallen and how the fifth piece, the gauntlets had gone missing. After telling Kassandra to retrieve the armor and warning about the Hounds of Hades, Charon left.[2]

The first task Charon had Kassandra complete was giving a lost soul an honorable death in battle.[3] After helping the lost soldier, Kassandra returned to Charon at the docks. Charon's second task for Kassandra was finding an asphodel flower to heal a woman who thought she was still sick. After retrieving the flower, the woman was then escorted to a pyre to be cleansed of the plague.[4] After that, Charon tasked Kassandra with helping a family that were being hunted by the hounds of Hades. Kassandra then relocated the lost family to safety.[5] The fourth and final task was helping uncover a thief stealing other souls' coins. Kassandra interviewed several souls before Hades appeared before the culprit and punished him.[6]

It was customary for the dead to be given an obol or two to pay Charon his fee. Kassandra offered some to Kyra for Podarkes' journey at his funeral.[7]

This tradition was also observed by Pothinus, a member of the Order of the Ancients during the 1st century BCE in Egypt, placing a coin in his own mouth as the Medjay Bayek of Siwa killed him[8], as well as by Jacob Frye, a British Assassin who gave his target Philip Twopenny a coin "for the path of the dead".[9]

In 2012, both the river Styx and Charon were visually manifested in the Animus Black Room simulation of Clay Kaczmarek's memories.[10]

In 2018, Layla Hassan kept notes on the Greek gods, including Charon, on her laptop in her collection "Bios of the Gods".[1] A simulated Animus modification was also available that shared Charon's name but not his likeness.[11] 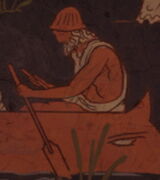 Kassandra meeting Charon on the banks of the Styx

Manifestation of Charon in the Animus Black Room