Assassin's Creed Wiki
Register
Don't have an account?
Sign In
Advertisement
in: Massachusetts, Cities in the United States, Animi virtual locations,
and 2 more

Charlestown is a neighborhood in Boston, Massachusetts of the United States. It was formerly a separate town in the northeastern part of the British Empire's colonial territories in North America, in a region known as the Frontier.

At the start of the American Revolutionary War in 1775, the Continental Army under Israel Putnam laid siege to Boston, and camped at Breed's Hill on the Charlestown peninsula north of the city. The British Army sent two ships to bombard Charlestown. The Kanien'kehá:ka Assassin Connor came seeking the Templar John Pitcairn, and was informed Pitcairn would only come out of hiding if the bombardment ended.

Connor traversed the town during the bombardment, during which the church tower was destroyed. Connor stealthily set fire to the ships, forcing Pitcairn out of hiding and commencing the Battle of Bunker Hill. Connor assassinated Pitcairn on Moulton's Hill, and retrieved a letter informing him and Putnam of a plot to murder George Washington.

In 2012, Charlestown was used by the entertainment branch of Abstergo Industries as a simulated location for the console stage of the Animus technology.

The simulation depicted Charlestown when it was still mostly whole, though various buildings showed signs of damage, including the town's church, which had its tower partially destroyed. Streets blocked off with overturned wagons and encampments set up near the hillside also hinted at the presence of war. Closer to the waterfront stood storage houses, as well as plenty of goods and wares that had been neatly stacked together.

With the implementation of new technology, simulated locations in the console stage were upgraded to have multiple aesthetic variations. Because of this, Charlestown could be utilized during the day, at dawn, or during the night, when a fiery conflict brewed.

The shore of Charlestown

A part of Charlestown's harbor

Another part of Charlestown's harbor

The center of Charlestown at dawn, with various Animi Avatars milling about

Charlestown at night, with conflict brewing in the distance

The center of Charlestown at night

The church of Charlestown, in flames 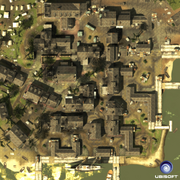 An aerial view of Charles Town