Charles de la Motte (died 1503) was a French marquis, an ally to the commander of the Papal army, Cesare Borgia, and a member of the Templar Order. A skilled combatant, he commanded a force of French mercenaries.

In 2012, his genetic memories were used as an Animi Avatar by the Templar company Abstergo Industries, in the first stage of training for their Animus recruits, under the title of the Marquis.[1]

"The Frenchman Charles de la Motte questions the courage of Italia and has called a tournament to prove his men are superior."
―Francesco Vecellio.[src]

In 1503 at Barletta, Charles entered into a contest with the Italian knights serving in the Spanish Army, aiming to prove France's superiority.[2]

This competition was sabotaged by a team of Italian Assassins, however, who aimed to sour the relationship between the two Templars. In doing so, they dusted the French participants' supplies with poison on the night before the tournament, which caused them to under-perform the next day. Since Tessa Varzi was an expert in creating and applying poison, no foul play was detected, and the Italians' victory was deemed fair.[2]

"If the Church and its army turn their heads, there is no telling what harm de la Motte will cause here!"
―Francesco, regarding Charles' return to Rome.[src]

Later that same year, Charles and his men returned to Rome upon Cesare's invitation, where they received no interference from the Papal armies. With this, the French mercenaries began to assault the citizens, insulting and stealing from them, while the city guards warned off any who tried to stop them.[2]

Concerned, the Assassin team moved to intervene, and on the orders of their leader, Francesco Vecellio, they dispatched several of the Frenchmen with arrows and poisoned flowers, which were given to the troops by Tessa Varzi.[2]

Despite killing several of the soldiers, the combined power of the Borgia and French troops eventually drove the Assassin team to retreat, forcing them to take refuge in an inn. The building was soon set ablaze, and many Assassins – Tessa Varzi and Cipriano Enu amongst them – lost their lives in the flames.[2]

Sometime in 1503, Francesco saw fit to assassinate de la Motte, for which he consulted Ezio Auditore da Firenze – the Italian Assassin Mentor – for permission; despite this, Francesco mentioned that he would act even if he did not get Ezio's consent.[3]

However, while Ezio advised Vecellio that the desire for revenge was a good motivating force, he went on to state that he didn't think Francesco was experienced enough to not be consumed by it and risk failure, following which he volunteered to track down and assassinate de la Motte himself. The Mentor proved successful in this aim, though he received little to no confession of Charles' actions in the latter's final moments, the Templar being stubborn to his dying breath.[3] 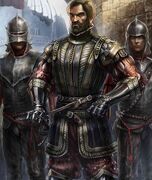