Edward Kenway: "Maybe Hornigold was right. Maybe the world does need men of ambition to stop the likes of you from mucking it all up."
Charles Vane: "Or maybe you just don't have the stones to live with no regrets."
—Edward Kenway and Charles Vane, 1719.

Pirate Republic
Crew of the Ranger

Charles Vane (c. 1680 – 1721) was an English pirate captain who sailed the West Indies on his brigantine, the Ranger. He made a name for himself by targeting English, Spanish, and French industry ships from 1716 until 1719, and was notorious for his harsh treatment of merchant seafarers and soldiers alike.

Like his compatriots Benjamin Hornigold, Edward Thatch and Edward Kenway, Vane worked as a privateer under the British crown. As late as 1715 he operated under the command of privateer Henry Jennings, who was most notable for attacking Spanish ships salvaging cargo from the Spanish Treasure Fleet shipwreck site. However, with the Treaty of Utrecht making the life of a privateer unsustainable, Vane sailed for Nassau in 1716.[1]

At some point in late 1715, Vane's Ranger launched a preemptive attack on El Arca del Maestro, a Spanish galleon captained by the French buccaneer Julien du Casse. However, the Ranger was no match for the galleon, and was forced to retreat.[2]

After arriving in Nassau in 1717, where he and Jack Rackham informed Edward Kenway of a large prize in a nearby fort, Vane became a leading member of Nassau's pirate community.[2] In May of the same year, sobered and enraged by the rum shortage in Nassau, Vane recklessly attacked the ships of the area and was only saved through the timely intervention of Alonzo Batilla. The French pirate was sent by Christopher Condent to stop Vane from dooming himself and the Pirate Republic with him by attracting too much attention on Nassau.[3]

In March 1718, Vane was organizing a raid on Harbour Island. He gathered an army and intended to loot the island before the Royal Navy would. He also marooned the island's Deputy Governor, Richard Thompson on a deserted islet, since Thompson refused to tell the pirate where his gold was located. Meanwhile, Alonzo Batilla was looking for Thompson, in the hope to find out more on the whereabouts of La Buse. Vane was then confronted by Alonzo, who demanded he surrendered Thompson. Vane refused and sent his flotilla to attack Alonzo, who in turn sank his fleet. Vane then tried to escape by dropping a trail of mines but to no avail, since Alonzo caught up to him and after a short battle, he was defeated. At last, Vane surrendered, telling Alonzo the location of Thompson.[3]

In July 1718, Vane was present when Woodes Rogers arrived in Nassau to offer its residents the King's pardon, absolving them of their crimes if they chose to give up piracy. Unlike Benjamin Hornigold, Vane was not keen on accepting the pardon, and worked with Kenway to orchestrate an escape from the barricaded Nassau. Together, they planned to build a fireship with gunpowder to clear the blockade.[2]

While Kenway stole the gunpowder from the British, Vane managed to secure the pine pitch. However, they overheard that Commodore Peter Chamberlaine intended to disregard Roger's orders and destroy all pirate ships in Nassau's harbors. In order to ensure the success of their plan, Vane suggested that Kenway deal with Chamberlaine.[2]

After Chamberlaine was assassinated, Vane met up with Edward to load the gunpowder aboard Rackham's ship, the Royal Phoenix. Before they left, Vane violently berated Rackham for smoking a pipe near the gunpowder. The fireship proved to be successful, destroying the ships blockading one of Nassau's harbors, allowing the Jackdaw and the Ranger to escape, with Vane shouting oaths and insults back at the foundering British.[2]

"It were your bloody imagination that landed us here, Kenway! I'll be damned if I let that mind make one more decision for me!"
―Charles Vane, while threatening Edward Kenway, 1719.[src]

When Edward Thatch announced his retirement from piracy, Vane sailed to North Carolina in a bid to dissuade him, and convince Thatch to help take back Nassau. However, his efforts were in vain and he departed, empty-handed and cursing Thatch.[2]

After Thatch's death at the hands of the British, Vane decided to help Kenway find the Observatory. The pair tailed the Royal African Pearl, a slave ship belonging to the Royal African Company, in the hopes of finding information on the Sage Bartholomew Roberts. Vane recklessly fired on the Pearl, apparently heedless of the danger such an action posed to the slaves below deck. However, the slave ship outgunned the Ranger by a significant margin and returned fire, crippling Vane's ship and leaving it dead in the water.[2]

Vane and his crew were rescued by Kenway, who brought his Jackdaw alongside the Ranger, and joined them in the subsequent battle and capture of the Royal African Pearl. They learned from the Pearl's captain that Roberts crewed a ship called the Princess and could be found in Kingston, with Vane subsequently shooting out the captain's left hip. Seconds later, Rackham and the surviving crew mutinied against Vane and Kenway, commandeering the Jackdaw and marooning both of them on Isla Providencia. During their time on the island, Vane's behavior became increasingly erratic; he took to hiding in the jungle, emerging only to steal food and resources that Kenway had gathered.[2][1]

Growing frustrated with Vane's actions, Kenway pursued the man, and Vane fiercely retaliated with an arsenal of recovered weaponry. Despite this, Edward managed to neutralize Vane – but spared him – abandoning the man on the island while he escaped by commandeering a passing fisherman's schooner.[1]

Some time after Edward's escape, a British ship arrived on the island. Taking his chances, Vane approached the vessel and tried to talk his way onboard. However, the ships captain (a former pirate) recognized Vane. Ultimately the Captain and his crew chose not to arrest Vane and he was left marooned on the island.

Fortunately for Charles, a few weeks later, another British vessel showed up. This time, Vane was not recognized and managed to secure passage off the island. Unfortunately, this stroke of good fortune soon turned out to be a curse disguised as a blessing. It turned out that this new vessel was working with the previous one and that the captain from the first ship happened to be aboard. Vane tried to keep a low profile, but after only a few days at sea, he was spotted by the original captain. After confirming that it was indeed Vane standing in their midst, the reformed pirate informed his fellow captain and the rest of the ships crew as to their passengers true identity and Vane was arrested on the spot. The captured pirate was then imprisoned aboard the vessel and taken to Port Royal, where he was handed over to the authorities and would remain in prison for the next two years.[1]

Edward Kenway was also captured due to Bartholomew Roberts' treachery and likewise imprisoned at Port Royal. One night whilst still imprisoned with his gibbet, Kenway overheard the guards talking about some of his former acquaintances, including Charles Vane. The soldiers mentioned that Vane had already been tried and found guilty of piracy and could not understand why he had not been executed.

Not long afterwards, the Assassin Mentor Ah Tabai liberated Edward, asking for assistance in rescuing his fellow Assassins Anne Bonny and Mary Read, who had also been captured and where now imprisoned within the fort. After sneaking past the garrison, sabotaging several alarm bells and paying a brief visit to Jack Rackham's remains, Edward managed to reach the prison. Shortly after entering the building, Kenway heard someone singing a familiar tune in a slurred, almost drunken manner. After eliminating several of the guards, Edward realized that the sound was coming from one of the cells. Approaching the corner cell, Kenway found Vane sitting on the floor, deliriously singing "Down Among the Dead Men".

Kenway greeted his former comrade, saying that he'd heard about his capture, but Charles, who appeared to have gone completely mad, barely seemed to register Kenway's presence. Edward hesitated, but quickly realized that Vane's mind was broken beyond any hope of repair. Since saving him would have been detrimental, rather than beneficial, Edward opted to leave Vane to his fate. Knowing what lay in store for the condemned man, Kenway sorrowfully wished him luck and lamented on how he wished the pair could have parted as friends. The completely oblivious Vane did not seem to understand what had just happened and soon went back to his singing.[2]

A few days later, on 29th March 1721, Charles Vane was publicly hanged for piracy. His body was later left on display in a gibbet outside the harbor at Port Royal as a warning to other pirates. After helping the Assassins to defeat the Templar's in the Caribbean, Edward Kenway saw a vision of his dead associates sitting at a table and drinking. Amongst them was Charles Vane.[1]

Charles Vane was a rude, foul-mouthed, sadistic, hateful, and self-centered pirate. Unlike his peers, he was not very interested in the principle of liberty beyond the wanton freedom to indulge in hedonism. His language was frequently vulgar and profane, and he delighted in insulting others. He trusted virtually no one, not even his friends. His mental health gradually degraded during his time being stranded on Isla Providencia, when his speech and actions became more frantic, driven by paranoia. He also developed a habit of singing sea shanties to himself on the island, especially "Down Among the Dead Men."

When Edward found him in a Jamaican prison two years later, Charles merely mumbled the lyrics of the shanty and could not acknowledge Edward's presence. 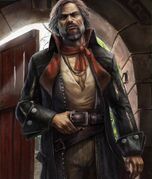 Vane as he appears in Assassin's Creed: Pirates

Vane telling others about the pardon

Vane knocking out an accomplice

Vane reminiscing about his father

Vane leveling a gun at Edward

Edward standing over the beaten Vane