Charles Robert Darwin (1809 – 1882) was an English naturalist and geologist, best known for his contributions to evolutionary theory. He is an ancestor to Vanessa.[1]

Due to his interests in nature, Charles Darwin neglected his education in medicine at the University of Edinburgh, much to his father's irritation. In turn, his father sent him to Christ's College at the University of Cambridge, in hopes of turning him into an Anglican parson. This did not stop Darwin's passion for the natural sciences, and instead intensified it, preferring his collection of beetles instead of studying.[2]

Darwin's detailed journal of his voyage aboard HMS Beagle made him famous in scientific circles. Upon his return, his father helped Darwin invest so that he could function as a self-funded gentleman scientist. However, his successes and overwork came to a toll on his physical health and Darwin easily caught illnesses and plagues.[2]

Eventually, Darwin managed to publish his work On the Origin of Species by 1859.[2]

Working with the Frye twins

"My brother and I will make sure that you can continue your work in peace."
―Evie Frye, talking to Charles Darwin 1868.[src]-[m]

Sometime in 1868, Darwin investigated the factory producing Starrick's Soothing Syrup, aware of the drug's effect on the London populace. Darwin tried to sneak inside, only to find the gate locked and the Templar-affiliated gang Blighters arriving. The scientist hid himself and took the opportunity when the Assassin Jacob Frye eliminated the guards and opened the lock.[3]

Sharing the same goal in stopping the Syrup's production, the two discovered that the syrup contained the drug opium and turned the pressure lever for the distillation tanks to burst and release gas. Fortunately, the pair escaped the now burning building. Darwin then introduced himself to the young Assassin.[3]

Darwin would later confront Richard Owen, accusing him of writing an anonymous article that insulted his name and reputation, but Owen brushed him off and drove off in a carriage. Jacob came by shortly afterwards, so Darwin urged him to pursue Owen, as he knew who was producing the Syrup. Jacob later returned after having intimidated out of Owen that the Syrup's producer was Doctor John Elliotson.[4] Jacob then proceeded to infiltrate Lambeth Asylum and assassinate Elliotson.[5]

Darwin later ran into Jacob again, as well as his twin sister Evie, and asked their help in recovering an important fossil from a colleague of his named Dr. Schwartz. Though the Fryes were able to recover the fossil, they informed Darwin that Schwartz was intercepted and killed by Templars.[4]

Another time, Darwin asked one of the Frye twins to fetch him a newspaper. The Assassin later discovered that men were paying vendors to spread an anti-Darwin propaganda and warned the biologist of it.[6]

By the 1870s, Darwin became one of the most popular biologists in the world, with his theory of evolution and unified life sciences which explained the diversity on the planet. He was honored with a burial in the Westminster Abbey.[2] 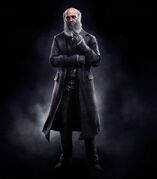 A Venerable Orang-outang published by The Hornet, a satirical magazine