The Champion (harvested from: Georgios Kostas) was an Animi Avatar used by Abstergo Industries to train recruits in the second stage of their Animi Training Program. His specialty weapon was a crude hand-held axe.

The Champion had several unique moves:

Walking up to his his target, the Champion bashes the head of his axe into their gut, winding them and keeling them over, before bringing his weapon around and embedding it into the back of his victim's neck. Pulling back roughly on his axe, the Champion lets his target fall to the ground, where they die of blood loss from their injuries.

Walking up behind his target, the Champion rapidly swings his axe into the right of their waist and removes it. While his victim begins to react from the pain, he fluidly finishes them off with another attack to the base of the neck, cutting down into his victim's windpipe and causing them to collapse to the floor from suffocation and blood loss.

Rushing towards his target from the front, the Champion surprises them by swiftly lifting them off of the ground with both of his hands. Before they can react, he drops down to one knee and slams his victim down hard onto his leg, snapping their spine on contact. From there, the Champion lets his dead target's body roll from his knee as he stands up, his victim lying motionless on the ground.

Racing towards his target from behind, the Champion swiftly punches them in the side of their waist, winding them and leaving them vulnerable. As his victim reacts, he grabs them by their head and yanks it backwards, leaning them over at an uncomfortable angle, before brutally slamming his clenched fist down onto their chest. With his strength shattering their ribcage, the Champion leaves his target to fall to the floor, where they cough up blood due to the forceful impact.

Grabbing his seated target's foot, the Champion drags them off the bench until their head rests against it. Before his victim can do anything to defend themselves, he forcefully kicks them in the face, violently sending their head backwards and breaking his target's neck on the bench behind them.

Leaping from above, the Champion lands onto his target with his axe unsheathed, before driving it into their face. Shattering the skull of his unfortunate victim, he roughly yanks his weapon out and sheathes it, while leaving them to die on the floor.

The Champion could be customized in several ways:

The Champion was always the target that a recruit must kill in the Introductory Session of the Animi Training Program's second stage, therefore he was the only character that a recruit could not choose in the session.

Concept art of the Champion, by Rémi Farjaud 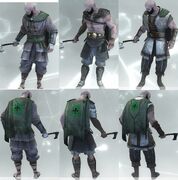 The Champion's customization options, viewed from the front and back

The Champions being hunted by a group of Tricksters

A group of Guardians being hunted by the Champions

The Champions repelling an attack by the Thespians against their base