Cerberos, also spelled Cerberus, is a mythical three-headed dog who guards the gates to the Underworld in Greek mythology.

The fame of the creature survived into the Greek mythology as the hound of Hades, set to guard the Greek underworld to prevent the dead from fleeing back to the land of the living.[1]

The last of Herakles' twelve labours for King Eurystheas of Mycenae was to subdue and take back Cerberos from the underworld.[2] After preparing for the journey by visiting the Sanctuary of Eleusis in Attika, and participating in the Eleusinian Mysteries, Herakles made his way to Cape Tenaron.[2]

After conquering the beast with his bare hands, Herakles brought Cerberos to Eurystheas. The beast was then returned to Hades.[2]

In a simulation created by the Isu Aletheia, Persephone had a dog companion named Ros, which was given to her by Hades. Ros was transformed into Cerberos by Persephone after she threw an artifact into a well for Ros to fetch. Cerberos confronted the misthios Kassandra, who was tossed through the well by Persephone, and was later defeated by her. As she does so, she took out the artifact from Ros' collar, effectively killing him.[3]

During the Peloponnesian War, a triplet of brothers called themselves the Cerberus on the island of Kos. Around the same time, the misthios Kassandra found sails and finery bearing the depiction of Cerberos' heads for the ship Adrestia in the sunken depths of Pavlopetri.[4]

Meanwhile, the Greek seas were roamed by ships displaying likeness of Cerberos on their sails. The pirate ships Shadowed Nymph and Hekate's Grace unfurled their sails while advancing on their targets.[5]

One of Layla Hassan's Animus modifications allowed Kassandra to obtain a harness said to have been made from scraps of Cerberos' fur.[4]

The painting featuring Herakles bringing Cerberos to Eurystheas, as seen in Discovery Tour: Ancient Greece, is from a Caeretan hydria from around 530 BCE.[2]

The etymological origin of the name Cerberos is contested; however one theory is that it's derived from a Proto-Indo-European root for 'spot'. Other theories include PIE root meaning 'to growl', and the Greek words meaning 'flesh-devouring', and 'evil of the pit'. 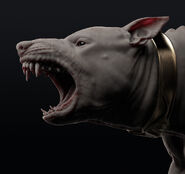 Statue of Hades with Cerberos in Elis

The Shadowed Nymph and her sail featuring Cerberus

The Hekate's Grace and her sail featuring Cerberus' heads