Castel Gandolfo is a small Italian town located in Lazio, south-east of Rome. It is well known as the summer residence of the Pope.

In 2012, it was used as a simulated training location by Abstergo Industries during the first and second stage of their Animi Training Program.

The exterior consisted of a large open courtyard, with a rectangular fountain in the center, and winding stairs that lead into the palace positioned at the sides. The interior was richly decorated, with the main hallway boasting a large chandelier. Tents with performers were set up in several rooms, to entertain the visitors.

Castel Gandolfo was not programmed to have aesthetic variations. As a result, it could only be used during the day.

The Footpad running up to assassinate the Smuggler

The Harlequin assassinating the Engineer

The Smuggler chases the Captain through Castel Gandolfo's hallways 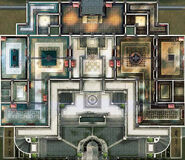 Retrieved from "https://assassinscreed.fandom.com/wiki/Castel_Gandolfo?oldid=731273"
Community content is available under CC-BY-SA unless otherwise noted.