The Buccaneer (harvested from: Parry Crowther) was an Animi Avatar used by the entertainment branch of Abstergo Industries, as part of their plan to influence the general public, via the console stage of the Animus technology. He uses a hook as his specialty weapon, a simple ship tool improvised for use as a deadly weapon.

Walking inconspicuously in front of his target, the Buccaneer swings his hook in a downwards arc and piercing it into their left shoulder. As the weapon lodges itself into his victim, he kicks their left knee from underneath them, sending them spinning onto their back as his claw rips a savage wound when it frees itself with the momentum.

Stealthily approaching his target from behind, the Buccaneer draws his hook, before reaching around and stabbing it into their neck. As they stand vulnerable from the blow, he closes the distance and grasps their shoulder, before the Buccaneer twists his victim and wrenches his weapon sharply to the right, slitting their throat and spinning them, where they stumble and fall to their death.

Swiftly running up to his target, the Buccaneer uses the momentum to swing his hook into his victim's neck, causing them to stand limp. He then kicks their left knee from behind, causing them to fall to their knees while the weapon still lodged in their neck further opens their wound. The Buccaneer then forcibly tears out his hook, as his victim falls over to the ground, lifeless.

Nearing his target from behind, the Buccaneer stabs his victim in the left arm with his hook. Following this, he wrenches his weapon to the right to make his target face him. Before they could do anything in response, the Buccaneer latches his hook into their chest and brutally tears it downwards, bringing his victim to their knees before falling backwards and dying from their wound.

Rushing up to his contract, the Buccaneer unsheathes his hook and brings it down upon their skull with tremendous force. He then uses his free hand to support the wielding hand, and pushes it down. The hook pierces into the skull further, and the target falls to the ground face-first, dying a painful death.

Quickly closing the distance between himself and his prey, the Buccaneer cruelly wedges his claw into his target's groin. As his contract recoils in searing pain, the Buccaneer uses the leverage from the hook to turn them upside down over himself, and his lifeless target falls to the ground behind him.

Jumping onto his target from above, the Buccaneer draws his hook and raises it above his head, before swinging it down into their jugular as he collides with them. As their body breaks his fall, he rips his weapon out of his victim, before sheathing his hook at his side.

The Buccaneer grabs his seated target's foot and drags them off the bench, until their head rests against it. Before his victim can do anything to defend themselves, the Buccaneer forcefully kicks them in the face, violently sending their head backwards and breaking their neck on the bench behind them.

The Buccaneer could be customized in several ways:

Promotional art for the Buccaneer 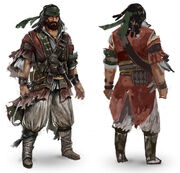 Concept art of the Buccaneer

The Buccaneer, about to be killed by the Lady Black

The Cutthroat being assassinated by the Buccaneer

The Buccaneer being stabbed by the Firebrand

The Buccaneer having been killed by Blackbeard 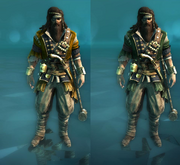 Alternative costumes for the Buccaneer

Pirate, Warrior and Usurper costumes for the Buccaneer 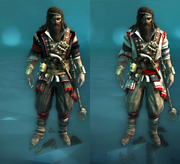 Templar and Assassin costumes for the Buccaneer 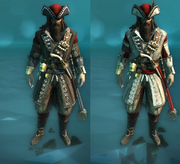 Rum Smuggler and Prestige costumes for the Buccaneer 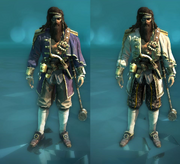 Gentleman and Golden Boy costumes for the Buccaneer

Русский
Community content is available under CC-BY-SA unless otherwise noted.