Brutes were heavily-armored guards during the Renaissance. They donned durable armor, carried large, heavy weapons and were one of the strongest guards. However, this was offset by their slow movements due to the weight of their equipment.

Brutes were tricky enemies to defeat, due to the power behind each of their attacks; some of which could neither be blocked nor countered. They are heavily armored as well, meaning that they can withstand a number of blows before going down.

The regular attacks of Brutes could be deflected with any weapon, though they could not be countered by a short blade or any sheath-able weapon.

A counter could only have been performed with another heavy weapon, such as those the Brutes themselves carried, a long weapon often carried by Seekers, or by a Hidden Blade. The successful timing chance for the latter, however, was notoriously small, as an Assassin was given only a fraction of a second to react.

A Brute's regular attacks could also be countered through a disarm maneuver, which left them open to a lethal, follow-up attack. The timing required for the disarm was short, however, albeit slightly longer than that of the Hidden Blade counter.

Additionally, like all other enemies, Brutes were most easily dispatched through being assassinated from above, or while undetected; with either the Hidden Blades or a ranged weapon, such as the Hidden Gun or crossbow.

There were two variants of a Brute's special attacks, of which neither could be blocked nor countered, and could only be avoided by striking pre-emptively or through dodging.

A Brute would perform a Smash by raising their weapon overhead and taking a strong downward swing; knocking their target onto their back, and inflicting around the damage as one of their regular attacks.

The Smash special attack also took less time for a Brute to prepare (approximately one second), in comparison to a Disarm Smash.

More forceful than an empty-handed disarm, a Brute performed a Disarm Smash by holding their weapon out behind them and then swinging it from right to left, breaking through an opponent's guard and often knocking away their weapon.

The attack essentially did no damage, but as mentioned, it opened an enemy up to attacks from other foes in a fight, as well as bestowing the inconvenience of being without a weapon.[1]

Brutes were not highly intelligent, and could be escaped once their line of sight had been broken by blending or hiding. They were also neither agile nor quick, and could not free-run or climb. As such, taking to the rooftops was an easy method of escape.

Certain Brutes appeared to have a black-brown finish or trim on their armor plating, marking them as higher-ranked Brutes that were more resistant to enemy attacks. Brutes of Rome also bore unique, more intricate armor than their counterparts in other cities.

Additionally, Brutes rarely ran from a fight, even if they were forced to face an opponent alone; unless they were disarmed. Inversely, killing a Brute caused other guards accompanying them (particularly those with lower ranks) to flee.[1]

Concept art of a Brute 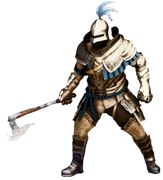 A Venetian Brute with two other guards

Ezio fighting the Borgia Brutes
Add a photo to this gallery

Retrieved from "https://assassinscreed.fandom.com/wiki/Brute?oldid=894684"
Community content is available under CC-BY-SA unless otherwise noted.