Brothels acted as the homes and workplaces of the courtesans, often run by Madams. During the 16th century, brothels could be found in Florence, Venice, Rome, and Monteriggioni, and all of them appeared to have small rooftop gardens, which distinguished them from other nearby buildings. In Rome, other than its central brothel, the Rosa in Fiore, there were several small faction buildings that could be renovated into brothels, allowing the courtesans that resided nearby to be hired.

In 18th century, brothels prospered in the New World as well as they had in the Old World; in Port-au-Prince, La Dame en Rose served as a meeting place. Edward Kenway had one built in the small port town at the Great Inagua to provide a home for dancers who entertained his crew.

Nearing the end of the 19th century, despite the attitudes of the Victorian era, brothels bloomed in London.

During the Peloponnesian War, the House of Aphrodite served the citizens and visitors of Athens, Greece.

During the Fall of 1191, when the Levantine Assassin Altaïr Ibn-La'Ahad traveled to Kyrenia in Cyprus, a brothel was located in the city's Merchant District. There, the courtesans had different appearances, though they were similar in that they wore long garments around their waists, but possessed different tops.[1]

During the 9th century, Viking shieldmaiden Eivor Varinsdottir entered a brothel in southwest Colcestre in search for the Dane Rollo, whom she needed to stage a kidnapping of Estrid. She found Rollo tied up and blindfolded, being hit with a whip by a prostitute, among other women serving their customers.[2]

La Rosa Colta (The Plucked Rose) was a brothel located in the Italian city of Florence, headed by Paola. It was founded in 1465, when Paola decided to help the women of the streets by giving them a home and education. As it became popular, the brothel was commonly visited by members of the signoria, as well as those of the Medici family.

Here, the Italian Assassin Ezio Auditore da Firenze was taught the ways and discretion of the courtesans, eventually learning how to blend and to pickpocket.[3]

Felina was the brothel of Monteriggioni in Tuscany. When Ezio Auditore da Firenze restored the town's facilities, Felina was one of them.[4]

La Rosa della Virtù (The Rose of Virtue) was a brothel located in the city of Venice, and its head courtesan was Teodora Contanto. The brothel was founded and run by former nuns, therefore the Pope repeatedly attempted to see it closed down. Despite this, the brothel continued to operate until a fire in the year 1516.

Here, Ezio spoke with Teodora and the other courtesans about planning the assassination of the Templar Marco Barbarigo, who had been newly appointed as the Doge of Venice.[3]

The Rosa in Fiore (The Blooming Rose) was the center of courtesan operations in Rome, first managed by Madonna Solari, then jointly by Maria and Claudia Auditore da Firenze. The courtesans here were used to gather information on the Borgia's forces in Rome, which was later utilized to weaken the family's hold over the city by the Assassin Order.[5]

La Reina Sonriente (The Smiling Queen) was a renowned brothel located in Seville during the Renaissance, owned and operated by the Spanish Thieves' Guild.[6]

A small brothel was constructed near Edward Kenway's manor on Great Inagua with funds provided by the pirate. As such, it introduced housing for the dancers who provided their services to Edward and his crew.[7]

La Dame en Rose (The Lady in Pink) was run by Madam Bastienne Josèphe in the 18th century. Profits from the brothel were used to buy freedom for slaves, and information gleaned from its political clients was secretly passed to the Maroon rebellion.[8]

Gracechurch Street brothel, located in City of London, was the most successful of the brothels owned by Olwyn Owers, or 'Lady O', in 1888.[9]

In 1888, Ludgate Hill brothel was another establishment in City of London that Lady O owned.[9]

Located in Whitechapel, Buck's Row brothel was one of Lady O's facilities in 1888.[9] 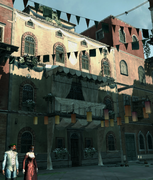 The Rosa in Fiore

A brothel in Great Inagua

Concept art of a brothel in London in 1888