The Bretton Woods Conference was a meeting held in the town of Bretton Woods, New Hampshire, to determine the international monetary systems to be set up in European countries after the conclusion of World War II. Spanning from the 1st to the 22nd of July 1944, 730 delegates from 44 countries were in attendance.

Secretly, the conference was a cover for a meeting between the economic agents of the Templar Order, including John Maynard Keynes and Harry Dexter White. On the last day of the conference, a speech was given to Abstergo Industries employees, economists, and world leaders, mentioning the formation of the "Plan" by Henry Ford and Ransom Eli Olds in 1910 and the threat presented by the communist system, as well as the efforts of Adolf Hitler and Joseph Stalin to create the "turmoil and fear necessary" for the implementation of the new economic systems. 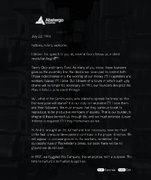 The speech detailing Abstergo's plans
Add a photo to this gallery

Retrieved from "https://assassinscreed.fandom.com/wiki/Bretton_Woods_Conference?oldid=787827"
Community content is available under CC-BY-SA unless otherwise noted.