Brasidas of Sparta (died 422 BCE) was a distinguished Spartan military officer who served during the early years of the Peloponnesian War.

Well before the Peloponnesian War swept through the Greek world, Brasidas made the acquaintance of Lagos, a farmer who went on to become the leader of Arkadia.[1] Lagos managed to get supplies through to the starving soldiers serving Brasidas; this deed made enough of an impression on Brasidas that he reminisced about it years later during the Peloponnesian War. The two kept in contact throughout the years and grew close, with Brasidas even referring to Lagos as a "dear friend."[2]

Brasidas had also befriended Myrrine, the daughter of the late King Leonidas I and wife of the general Nikolaos. When Myrrine left Sparta around 446 BCE after the incident on Mount Taygetos, many were willing to write her off as dead, but rumors of her survival persisted, and Brasidas was delighted to learn that they these rumors were true.[3] Despite their differences in opinions, they were fond of each other's company and respected each other.[2]

When the Peloponnesian War broke out, Brasidas was sent by King Archidamos to Korinthia, which was an ally of the state. There, Brasidas was tasked to spy on the Monger, a thug and a member of the Cult of Kosmos who took control of Korinth and the region. He also met the leader of the hetairai, Anthousa, who took charge in the efforts against the Monger's rule. However, they disagreed with one another about dealing with the Monger's death; Anthousa called for him to be killed in public while Brasidas and Sparta wanted a quiet killing.[4]

Around 430 BCE, Brasidas assisted the misthios Kassandra in destroying a warehouse belonging to the Monger.[4] After dispatching the waves of the Monger's thugs, Brasidas introduced himself to Kassandra and discussed how to deal with the Monger, insisting the he be killed quietly, rather than be publicly lynched as Anthousa desired, since he believed it would lead to anarchy in Korinth. Later, he learned of Kassandra's Spartan origin and lineage as being the granddaughter of the late King Leonidas I, discussing the fate of her adopted father Nikolaos and her mother Myrrine before parting ways.[5]

Due to this friendship and Lagos' aid, Brasidas wanted to free Lagos from the Cult of Kosmos' grasp when he came to Arkadia with Myrrine and her daughter Kassandra around 428 BCE.[7]

In 425 BCE, war came to Sparta when the Athenians invaded the region of Messenia. Brasidas took charge in the defense of Pylos against the Athenians. During the battle while assisted by Kassandra, Brasidas attempted to eliminate Deimos, Kassandra's brother and the weapon of the Cult, only for him to be knocked away with ease[8]

Despite suffering heavy injuries, Brasidas was able to recover and returned to battle. Around 422 BCE, he captured the city of Amphipolis in Makedonia. After learning of Kassandra's survival from the battle, he sent a messenger to Athens requesting her assistance, which she accepted. During the battle, Brasidas was killed by Deimos during the defense of the city, having been impaled on his own spear.[9]

Following his death, Brasidas was honored as a hero and the new founder of Amphipolis. Funeral games were later organized in his honor and became an annual event.[10]

In a simulation created by the Isu Aletheia, Brasidas was depicted as a tortured soul that resided within the realm of the Underworld ruled by Hades after his death.[11]

Brasidas was a Spartan nationalist and was proud of his Spartan heritage. As a highly skilled military officer within the Spartan army, Brasidas displayed rational thought and unlike most Spartans, Brasidas often prefers to use diplomacy and strategics whenever violence was never necessary. However, Brasidas would resort to brutal violence when left with no choice. Brasidas also values his friendships with those who prove their loyalty to him and to Sparta, such as Kassandra or Myrinne.[12]

In the simulation of the Underworld, Brasidas had grown disillusioned by his former Spartan nationalism as it only damned him to Tartaros instead of rewarded him with a happy afterlife in Elysium. By reuniting with Kassandra, who was on a pilgrimage to master the Staff of Hermes, Brasidas was able to come to grip with his past and takes solace in the fact that he hopes to one day be truly worthy of redemption for his actions.[11]

Brasidas was a highly skilled combatant and a profound military strategist. Brasidas was able to use his spear and shield in tandem with each other, which combined with his rigorously trained Spartan physical conditioning makes him a fierce warrior on his own right. He was able to easily slaughter a group of the Monger's men before working in tandem with Kassandra to finish off the rest of the Monger's men. 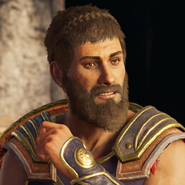 Brasidas at the warehouse

Closeup of Brasidas at the warehouse