Boston North End was the secret meeting place of the Sons of Liberty, and is also one of Boston's oldest and most storied boroughs. The district's most prominent building was the Green Dragon Tavern, which had a noticeable gold dragon sign.

In 2012, it was used as a simulated location by Abstergo Industries' entertainment branch, in order to influence the general public, as part of the console stage of the Animus technology.

The simulation depicted a part of Boston that was close to the shore, with lots of wide streets, dotted with the occasional stack of goods or beer keg. There were also high rooftops, which allowed one to spot the top of Beacon Hill in the distance. Some streets were sealed off by overturned merchandise, market stalls or carts, most likely the result of rioting; damage was evident elsewhere as well.

With the implementation of new technology, simulated locations in the console stage were upgraded to have multiple aesthetic variations. Because of this, Boston North End could be utilized during the day, the evening, or amidst rain.

The rooftops of the residential area

One of the wide streets

The Silent Shadow assassinating his target in a Wolfpack session

The Pioneer chasing after her target, with the Robber in the background

The Redcoat, about to be killed by the Bear 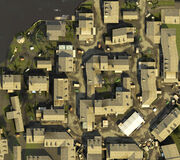 Retrieved from "https://assassinscreed.fandom.com/wiki/Boston_North_End?oldid=787783"
Community content is available under CC-BY-SA unless otherwise noted.