In 2012, it was used as a simulated location by Abstergo Industries' entertainment branch, in order to influence the general public, as part of the console stage of the Animus technology.

The simulation depicted part of the actual harbor and its surrounding area, consisting of busy streets and high rooftops, interspersed with an occasional clearing. The harbor itself was filled with various good and wares, neatly stacked on top of one another, as well as market stalls. Some stalls had also been set up farther into the residential area, near one of the town's churches.

With the implementation of new technology, simulated locations in the console stage were upgraded to have multiple aesthetic variations. Because of this, the Boston Harbor could be utilized during the day, the night, or amidst snowfall.

The aesthetic variations of Boston Harbor

A street in Boston Harbor

The Night Stalker and the Lady Maverick hunting together

The Mountebank and the Silent Shadow going after their targets

The Commander in a chase with his victim, to provide a diversion for the Silent Shadow 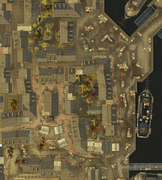 Retrieved from "https://assassinscreed.fandom.com/wiki/Boston_Harbor?oldid=787780"
Community content is available under CC-BY-SA unless otherwise noted.