Bonfire of the Vanities (DLC)

http://www.assassinscreed.com
The Bonfire of the Vanities was the second of two downloadable content packs developed by Ubisoft for Assassin's Creed II, and it was released on February 18, 2010.

The DLC included access to the Oltrarno District of Florence, as well as three Templar Lairs, which were previously exclusive to special editions of the game.

Main article: Bonfire of the Vanities

The Bonfire of the Vanities took place nine years after the events of the Battle of Forlì. Florence had fallen under the rule of the monk Girolamo Savonarola, who controlled the city with nine lieutenants, and with the Apple of Eden he had stolen from a critically wounded Ezio Auditore.

After traveling to Florence to retrieve the Apple, Ezio met with Niccolò Machiavelli in the city's Oltrarno District. There, Niccolò tasked him with assassinating Savonarola's lieutenants, who terrorized the people and kept them docile.

After the nine lieutenants had fallen, the people of Florence rose up, and charged Savonarola's residence at the Palazzo Pitti. There, they drove him out, and though Savonarola attempted to subdue them with the Apple, Ezio knocked the Piece of Eden out of his hand with a throwing knife. The civilians then brought the monk to be burned at the stake in the Piazza della Signoria.

As the Assassins followed the mob to the plaza, Ezio concluded that no one deserved to die in such pain, and killed Savonarola with his Hidden Blade before he could suffer. He then gave the people of Florence a speech about how they should follow their own path, and not that of anyone else. 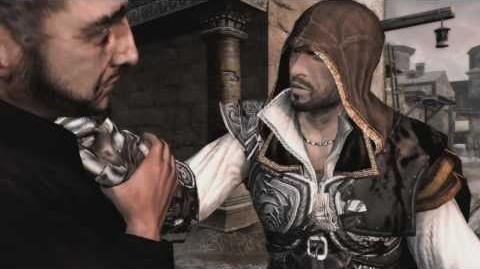