Blood vials are small crystalline cubes, designed by the First Civilization to contain the blood of an individual, for the purpose of viewing their actions through the Observatory.

Once a blood sample had been collected, it was placed inside the Crystal Skull that powered the Observatory, which would then project what the donor was seeing and hearing in real time. Thousands of these vials were stored at the Observatory, containing the blood of a number of Precursors, but they were materially worthless to anyone in conjunction with the complex, as their race had long died out and feedback from them could not be obtained.[1]

It was for this reason that the Templars under Laureano de Torres y Ayala sought the Observatory; so that they might make use of its abilities to spy on and blackmail numerous government officials. A few vials existed beyond the Observatory's walls, as one was needed in conjunction with a sample of a Sage's blood to permit access. During Torres' rule as Grand Master of the Caribbean Templars, he made it compulsory for all Templars to donate a dram of blood within a vial, as a means for Torres to ensure that he kept control over his allies; the Grand Master himself, however, used the blood of a decoy and intentionally mislabelled it. [1]

Following Torres' arrival at the complex in 1722, Edward saw that thousands vials were missing, prompting the Caribbean Assassins to devote their resources to locating these missing vials. [1]

In 1868, when Evie Frye and Henry Green infiltrated Edward Kenway's mansion, among his possessions was a blood vial.[2]

In 1916, during World War I, two German spies, led by Templars but controlled by a follower of Juno collected blood samples from a medical camp in London using blood vials.[2]

By the 1980s, Abstergo Industries had taken great interest in securing more vials, finding dozens since then. Of all of those recovered, only three vials had the DNA inside fully intact, and only one of the three contained the blood of a First Civilization member. In 2013, Abstergo described them in an internal memo, along with other First Civilization artifacts.

In 2013, an Initiate spy obtained a blood vial from Abstergo Entertainment and escaped with it.[3]

By 2014, Abstergo had recovered blood vials from Bartholomew Roberts’ stash. They were given to Álvaro Gramática to study the blood samples. The vials seem to have been destroyed during an Assassin attack on the Paris facility. 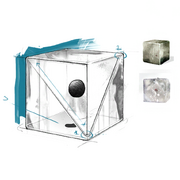 An Abstergo Industries depiction of a blood vial

Torres with a blood vial

Edward looking at a vial recovered from a Portuguese fleet

Blood vials housed in the Observatory

Edward inserting a vial into the Crystal Skull

Retrieved from "https://assassinscreed.fandom.com/wiki/Blood_vial?oldid=659562"
Community content is available under CC-BY-SA unless otherwise noted.