"More than a mere tool, his Hammer defines the Blacksmith. He hits it hard against huge pieces of metal, making a strong and powerful sound. The Blacksmith uses the same gestures to smash his targets' heads. Funny, he often muses, the sound is quite different then..."
―Description of the Blacksmith.

The Blacksmith (harvested from: Auguste Oberlin) was an Animi Avatar used by Abstergo Industries, to train the recruits in the first stage of their Animi Training Program. He used a large hammer as his weapon, and was unlocked once a recruit reached Level 15.

The Blacksmith had several unique moves:

Approaching his target casually, the Blacksmith scoops them up in his arms and lifts them high above his head, before violently slamming their back down onto his knee, snapping their spine. Finished with his victim, he rolls them off of his leg, sending their lifeless body falling to the ground, before standing up and carrying on as usual.

The Blacksmith sneaks up to his target from behind and forcefully places his hammer across their throat, holding it at both ends of the handle. While his victim can do nothing but struggle, he roughly twists his weapon and snaps their neck, sending their dead body spinning to the floor. He then conceals his hammer by replacing it at his back.

The Blacksmith runs at his target, before knocking them helpless to the floor and riding his hammer head downwards into their face. Standing up, the Blacksmith nudges his hammer from side to side to help him dislodge it, before walking away, leaving his victim with a bloody mess for a head.

The Blacksmith runs up behind his target, before taking out his hammer and violently sweeping their legs from beneath them with great force, causing them to fall hard into the ground. He then brings the hammer around and swings it down onto his victim's face, crushing it messily and killing them instantly.

The Blacksmith approaches his seated target, before hooking his hammer underneath their foot and dragging them away from the bench by their ankle. Taking his hammer at the end with two hands, he smashes its head downwards into his victim's face, before replacing his weapon at his back.

The Blacksmith jumps from a rooftop and lands on his target, forcing them to the ground as he straddles their waist. From there, he delivers a powerful hammer strike down onto his victim's head, killing them instantly and splattering blood everywhere. Afterwards, the Blacksmith stands upright and conceals his hammer, before walking away from the gruesome mess of a body.

The Blacksmith could be customized in several ways:

Concept art for the Blacksmith

The back view of the Blacksmith's concept art

Promotional artwork of the Blacksmith 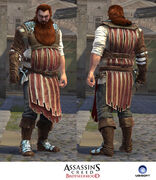 Concept models for the Blacksmith

Retrieved from "https://assassinscreed.fandom.com/wiki/Blacksmith_(Animi_Avatar)?oldid=831044"
Community content is available under CC-BY-SA unless otherwise noted.