Black Cross was a title bestowed upon the members of a branch within the Templar Order tasked with keeping the Grand Masters of the various Rites in line with the Templar Code and ideals.

Secret inquisitors only answering to the Inner Sanctum's orders, the agents were authorized to use any means necessary, even deadly force, to take down corrupted members of the Order. A Black Cross' secondary mission was to track Pieces of Eden for the Inner Sanctum.

Deadly enforcers acting as an independent morality police force of one man, very few individuals wore the title of Black Cross across the centuries though the Bolden family line counted many among their number.

With the presumed death of Albert Bolden in 1927, the role of The Black Cross was retired for almost a hundred years. However, Juhani Otso Berg believed that due to the troubled times the Order was experiencing during his era, it would be useful to revive the feared branch.[1]

By 2017, Berg – himself a member of the Inner Sanctum – had secretly taken up the mantle of Black Cross personally, being assisted in his nocturnal activities with technological support from a descendant of the Bolden bloodline, Dre.[2] 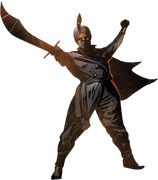 Juhani Otso Berg
2016 – present
Add a photo to this gallery

Retrieved from "https://assassinscreed.fandom.com/wiki/Black_Cross?oldid=849015"
Community content is available under CC-BY-SA unless otherwise noted.