"We had here a rare opportunity; a chance to take something base and shape it into a government, made and maintained by men of vision. But in two years we pissed it away... I won't make that mistake again."
―Benjamin Hornigold to Charles Vane, on the failure of Nassau, 1718.[src]

Benjamin Hornigold (1680s – 1719) was an English pirate from 1715 to 1718, and a member of the West Indies Rite of the Templar Order. He was most famous for mentoring Edward Thatch and for being one of the founders of the Pirate Republic at Nassau, before joining the Templar Order and hunting many of his former pirate brethren until he was finally assassinated by his former protégé Edward Kenway on the Santanillas Islands in 1719.

Hornigold was born in England in the 1680s, and at some point made his way across the ocean to the West Indies as a privateer. His first known act of piracy was in the winter of 1713 or 1714, when he used several small canoes and a sloop to raid ships and settlements in the Bahamas, eventually capturing a thirty-gun brig that he named the Ranger. This ship would eventually be given to his fellow pirate Charles Vane.[2]

During Hornigold's first years as a pirate, his second-in-command was former privateer Edward Thatch.[3] Soon their fleet expanded to five warships, led by the flagship Benjamin, pirating everywhere from Nassau to the Honduran coast. However, Hornigold was known not to attack British ships, leading some to believe that he was actually a privateer instead of a pirate. Sometime during this period he met Edward Kenway, who was recruited by Thatch during their career as privateers.[4]

Leader of the Pirate Republic

"Jaysus, let that dream go, lad. Nassau is the place to be, not England."
―Hornigold convincing Edward to remain in Nassau, 1715.[src]

Eventually, Hornigold helped establish a Pirate Republic called "the Brethren of the Coast" in Nassau, sharing the responsibilities of leadership with Thatch, Vane, and James Kidd.[5] When Kenway made his way to Nassau in 1715, Hornigold taught him how to successfully plunder ships, upgrade the Jackdaw,[6] and lower his notoriety. Hornigold also tried to persuade Edward to give up on his estranged wife, Caroline Scott, and settle in Nassau.[7]

In July 1716, Hornigold was deposed as the captain of his ship and the Assassin Samuel Bellamy took his position as pirate leader. The pirate Alonzo Batilla then arrived to take Hornigold away, dropping him in an island free of pirates. There, Hornigold told Batilla about Nassau, and insisted that he visit the place.[1]

Over the next three years, word reached Nassau that a pardon was being offered by Governor Woodes Rogers to any pirate who would accept it. Hornigold kept the pardon in mind as Nassau was ravaged by disease without an available cure.[4]

While Thatch wished to steal medicine from British warships, Hornigold suggested that they temporarily halt their pirating activities until the British no longer deemed them a threat. This resulted in an argument between the two until Kenway proposed a third solution: search for medicines in old wrecks without attracting British attention.[8]

While Hornigold and Thatch were both initially satisfied with this approach, it was soon revealed that medicines found in the shipwrecks were in unusable condition. Frustrated by their lack of success, Thatch used the Queen Anne's Revenge to assault a British Man O' War, which left Hornigold's ship damaged. While his crew were repairing the ship, Hornigold met with Kenway and informed him of Thatch's decision. Before Kenway sailed off to look for Thatch, Hornigold told him to leave Thatch be, saying the man should take responsibility for his actions.[9]

Although Kenway and Thatch were eventually able to recover medicines for the colony, the British arrived months later and blockaded Nassau. After meeting with Woodes Rogers and Commodore Peter Chamberlaine to discuss the King's pardon, Hornigold, Josiah Burgess and John Cockram accepted the offer and became pirate hunters for the British, tasked with bringing their former allies to justice. This led to many pirates, Kenway included, deeming them traitors and cursing their very names.[10]

Edward: "A pox on you, traitor! You sold us down river!"
Hornigold: "Because I found a better path! The Templars know order. Discipline. Structure. But you never could fathom these subtleties."
—Hornigold to Kenway, defending the Templar cause, 1719.[src]

As a newly appointed pirate hunter, Hornigold became more notorious than he had ever been before, capturing several pirates who refused to take the pardon. Under Roger's command, Hornigold grew to respect his superior, and soon became a member of the Templar Order along with Burgess and Cockram.[4]

In December 1717, Hornigold sailed to Mayaguana to attend a Templar meeting regarding the whereabouts of Olivier Levasseur, a French pirate who was in the possession of an artifact known as the Fragment of Eden. On his way there, he unexpectedly came upon Alonzo Batilla. Thinking the young pirate as a potential trouble maker to the Templar cause, he got rid of him by luring him into a trap. Hornigold then attended the Templar meeting, where he and Christopher Condent interrogated captain Barnes. The latter had no useful information about Levasseur and was shot by Condent. Surprisingly, Batilla then showed up and engaged a battle with Hornigold, to which Hornigold eventually retreated.[1]

In 1719, Hornigold and Rogers met in Kingston. Hornigold questioned the purpose of collecting blood samples and Roger's tactics when dealing with pirates in Madagascar. Upon hearing that the blood would be used for the purposes of spying, Hornigold expressed some concern, as he had given a sample of his blood as well. However, Rogers assured Hornigold that his sample would not be used in this manner; rather, it would act as a display of trust.[11]

They later met with Grand Master Laureano de Torres y Ayala, telling him that Burgess and Cockram were close to locating the Sage Bartholomew Roberts in Príncipe. In the midst of their conversation, Hornigold spotted the Jackdaw anchored in the harbor, and realized that Kenway was spying on them.[11]

Forced out of hiding, Kenway admonished Hornigold for his betrayal; Hornigold defended himself by claiming that the Templars' actions were just, and that Kenway could never understand their cause. He then made his escape with the other Templars, leaving Kenway to deal with his men.[11]

"Some mighty piss-poor sailing back there, lads! And if we live out this day, by God, I'm flaying every last bitch of you! Steady up! And keep your backs together, lads! This fight ain't over!"
―Benjamin Hornigold, making his last stand, 1719.[src]

Hornigold later followed Kenway and Roberts to the Yucatán Peninsula, but was detected by the pirates and sailed into a rocky, fog-covered formation known as "the Devil's Backbone". Kenway's Jackdaw managed to avoid British ships looking for him and traded blows with the Benjamin before forcing the schooner to retreat.[12]

Lost in the fog and badly damaged, the Benjamin ran aground on the deserted island of Santanillas. Hornigold climbed to the top of an abandoned Maya temple on the island, creating a makeshift perimeter with his soldiers, but Kenway was able to scale the building and air assassinate his former friend.[12]

Collapsing, Hornigold berated Kenway for how far he had fallen, disregarding the man's retort that Hornigold was no better than he was. With his dying words, Hornigold expressed regret that Kenway was too enamored with glory and bloodshed to see the wisdom of the Templars, and told Kenway that he would die alone and disgraced if he kept his present course. Despite Hornigold's betrayal of the pirate way, Edward still felt remorse for killing him and when fondly recalling old friends, Hornigold appeared amongst them.[12]

Edward: "Remember the pardon, Thatch. We're to be subtle."
Thatch: "Says Hornigold! A pirate now too proud to call himself one!"
Edward: "Ah, he prefers caution to cannons."
—Kenway and Thatch, regarding Hornigold's approach to the King's Pardon, 1718.[src]

Though Hornigold's early ambitions did not include piracy, he was forced to take up the life due to privateers being rendered unnecessary after the War of Spanish Succession. A patriotic man, Hornigold chose not to attack any British ships, likely out of loyalty toward his home country. In addition, Hornigold had a military bearing, valuing order and behaving more like British soldier than a pirate.[4]

In spite of these factors, he was respected by his crew and peers alike and took to the pirate life enthusiastically, helping found the Pirate Republic in Nassau. For this, he had strong faith that the community would grow and thrive. However, after Nassau succumbed to disease, poor governance and economic difficulties, Hornigold became disillusioned with the pirate cause.[4]

Hornigold stood out from his compatriots in his strong idealism. He had extremely high hopes for Nassau, believing the settlement provided a rare chance to put their societal ideals to practice and create a civilization without the corruption and bigotry of the old empires. Even from the beginning, Hornigold's idea of freedom was different to that of Kenway's, with Kenway only considering freedom to be a license to live without rules and rebel against authority, whereas Hornigold possessed far more lofty ideas of civilization.[4]

It was this idealism that ultimately swayed him to join the Templars, to build a civilization and realize his ideals instead of living aimlessly as he thought was the case with the inhabitants of Nassau. Hornigold was deeply embittered by how much Nassau had degraded and deviated from his dream and willingly joined the Templars out of disgust for that failure and the life of piracy in general. Hornigold was also a good friend to his compatriots, tutoring Kenway in the ways of captaincy, and even warning him of the dangerous path he was taking.[4] 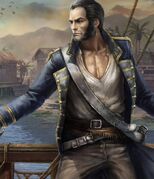 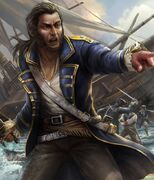 Memories art of Hornigold in battle 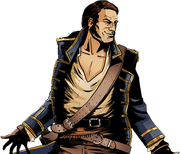 Hornigold as he appears in Assassin's Creed: Pirates 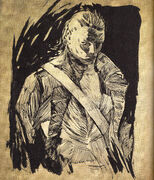 Hornigold with Thatch and Kenway

Vane telling Hornigold and Thatch about the King's pardon