"It's all a matter of perspective. There is no single path through life that's right and fair and does no harm."
―Benjamin Church, 1778.[src]-[m]

Benjamin Church, Jr. (1734 – 1778) was a doctor and a member of the Colonial Rite of the Templar Order, who served as Surgeon General of the Continental Army.

Serving under Grand Master Haytham Kenway, Church aided the Templars in establishing a permanent presence in the Thirteen Colonies and personally eliminated Silas Thatcher. Church also took part in the campaign to take down fellow Templar Edward Braddock, and continued serving the Order in the following years before his eventual defection.

After spending several years with the Continental Army, Church betrayed both the Patriots and the Templar Order to join the British Army in 1778 – for this deceptive act, Haytham Kenway forged a temporary alliance with his Assassin son Ratonhnhaké:ton to take down Church, as they both shared the desire to see him eliminated. As a result, Church was killed by Ratonhnhaké:ton aboard a vessel off the coast of Martinique, after being brutally interrogated by Kenway.

Church was born in Rhode Island and attended Harvard University where he studied medicine and surgery – instead of compassion, he chose to become a doctor believing it to be the most profitable profession. Soon after, Church graduated in 1754 and became a qualified and talented physician, residing in Boston.[1]

Church also became affiliated with the Templar Order and was to be recruited by Haytham Kenway. However, due to his wealth, Church was abducted and tortured by Silas Thatcher – a notorious slaver – and Cutter for protection money. Haytham and Charles Lee discovered Church's home ransacked, hence they began to search for his whereabouts by eavesdropping on guards and witnesses to his abduction, leading them to a warehouse on a nearby pier.[2]

In response to his treatment, Church refused to be extorted by Silas and promised to kill him for torturing him. To this, Silas left Church in Cutter's care, who threatened to remove several parts of his anatomy. Shortly after, Cutter sliced Church's left nostril, but the surgeon was saved by the arrival of Kenway and Lee.[2]

At the Green Dragon Tavern, Church had his nostril sewn up, and he showed gratitude towards Haytham for rescuing him and subsequently gave him information regarding Silas.[3] After recruiting John Pitcairn, Church, along William Johnson, Thomas Hickey and Charles Lee participated in Haytham's plan to infiltrate Southgate Fort, murder Silas and free the Kanien'kehá:ka slaves. By freeing said captive slaves, Haytham theorized that he would be able to gain favor with the Kanien'kehá:ka in order to gain information that would lead them to the mysterious Precursor site.[4]

Putting the plan into motion, Church and the others proceeded to ambush a slave cart transport – there they killed the escorts, disguised themselves in their uniforms and escorted the cart to the fort. Once inside, Haytham stealthily freed the slaves while Church and the others blended with and distracted the guards.[4]

However, upon realizing that the slaves had escaped, Silas raised the alarm. Church and the others triggered a battle, fending off the guards while Haytham pursued forth and wounded Silas. Church then approached the staggered Silas, before executing him with a shot to the head, fulfilling his vow for vengeance. From there, Haytham and the others freed the remaining slaves.[4]

In 1755, Church assisted in the assassination of General Edward Braddock, attacking the latter's expedition to Fort Duquesne. In the resulting chaos and confusion, Haytham assassinated Braddock and soon discovered the location to the Precursor site following the aftermath. With it proving to be a dead end, Haytham returned to the Green Dragon Tavern and formally inducted Lee into the Templar Order as Church and the others looked on, before the group agreed to change their mission to establishing a permanent presence and influence in the British American colonies.[5]

In 1773, Church was present at Martha's Vineyard, where he was talking with Nicholas Biddle in order to recruit him into the Templar Order. While doing so, he was interrupted by Ratonhnhaké:ton – then known as Connor – who demanded to know where Charles Lee was. Unimpressed, Church warned off Connor, further causing a brief confrontation between Biddle and Robert Faulkner, though this argument was cut short by Amanda Bailey's intervention.[6] Around this time, he became a vocal Patriot and a member of the Boston chapter of the Sons of Liberty, working as the Templars' agent within the organization.[7]

"Benjamin Church is no brother of mine. No more than the Redcoats or their idiot king."
―Haytham to Connor, regarding Church, 1778.[src]-[m]

By 1775, Church had joined the Continental Army, commissioned as Chief Physician and head of the medical wing. By then, he was very wealthy and owned a mansion that was later seized and ransacked in order to pay for the Continental Army's war drive, which may have been a factor in his eventual betrayal.[1]

Church was caught spying for the British. However, he insisted that he was innocent by claiming that he gave falsified information to the opposing force to deter their attacks. Despite this, Church was imprisoned, and upon his release he abandoned both the Continental Army and the Templar Order. To further cripple the former, Church and a group of other defecting Templars stole a large supply of weapons and medicine from a convoy for the Continentals and intended to defect to the British Empire.[1]

Church suspected that Haytham planned to kill him for this betrayal, and ordered several men to help guard and escort the stolen supplies out of Valley Forge, as well as ambush and kill Haytham. However, Church was also pursued by Connor, a member of the Assassin Order, who had formed a temporary alliance with Haytham, his father, in order to kill Church and retrieve the supplies for George Washington that the former surgeon had stolen.[8]

Together, Haytham and Connor tracked Church to the Smith and Company Brewery in New York, only to realize that it was a decoy, before being ambushed. However, the pair managed to defeat the guards and subsequently interrogated the imposter into telling them that the real Church had fled to Martinique aboard the naval ship Welcome, before he was killed by Haytham.[9]

"We had a DREAM, Benjamin! A dream you sought to DESTROY! And for that, my fallen friend, you will be made to pay."
―Haytham admonishing Benjamin, 1778.[src]-[m]

Despite being a few days ahead, the Aquila, captained by Connor, was able to catch up to the Welcome, finding it abandoned. A Schooner vessel then lured the Aquila into open waters and into an ambush, while Church attempted to escape aboard another Man O' War. However, the Aquila destroyed the escorts and disabled Church's ship by destroying the ship's mast.[10]

Haytham then took control of the Aquila, forcing it into the Man O' War in order to board the ship. Haytham caught up with Church below deck and proceeded to brutally beat him as punishment, enraged by his betrayal. Urging his father aside, Connor then intervened and asked Church where the supplies were. When he refused to say, Connor swiftly ended Church's life by impaling him through the ribs with his Hidden Blade. As he lay dying, Church revealed the location of the supplies – stashed on a nearby island. He then rebuked Connor with his final words, arguing that there was no such thing as a righteous cause.[10]

"Look, much as I'd love to spar with you, Benjamin Church's mouth is as big as his ego."
―Haytham to Connor, regarding Church, 1778.[src]

Church was an intelligent, resourceful and cunning man, and a highly valued member of the Templars. To support this, Charles Lee described Church as "a finder and a fixer".[7]

However, Church was a highly self-serving and duplicitous man. Despite his years as a surgeon and as part of the Templar Order, Church's only motivation was personal gain. He pursued a career as a surgeon believing it to be a profession that paid handsomely, and that people would pay any price to ensure their lives and health. He had little to no actual concern for the well-being of his fellow man and was quick to dismiss those who could not afford his services, fulfilling the unethical doctor stereotype by ignoring his Hippocratic oath. Church was also very egotistical, a quality noted by Haytham. This was to the extent that he had a portrait of himself at his home in Boston, possibly meaning that he was a narcissist. A married man, Church chose to neglect his wife and instead pursued another woman.[7]

To further support his treacherous nature, Church played both sides of American Revolutionary War, but even betrayed his true loyalties to the Templars. His final words to Connor suggested that he ultimately became disillusioned with the Templars' cause and saw neither side of those fighting in the Revolutionary War as just. Nonetheless, he chose to side with the British Empire as it suited his desire for personal gain, not out of any loyalty.[7] 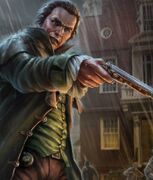 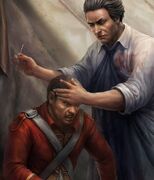