Assassin's Creed Wiki
Register
Don't have an account?
Sign In
Advertisement
in: Articles in need of sources, Articles that need updating, Articles needing images,
and 4 more

The Bellatores Dei (English: God's Warriors) was a secretive group of religious zealots which operated in Francia during the 9th century. Led by a scholar known only by the pseudonym of Isidore Mercator, the group followed the false decretals of Isidore, believing that Francia had fallen into apostasy and sought to restore to order of Christiandom into the state.[2]

In 886, they captured Empress Richardis, wife of Carolingian emperor Charles III, and attempted to perform a sacrificial exorcism on her.[3] 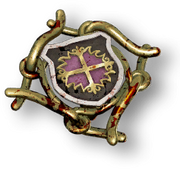 The crest of the Bellatores Dei