The Battle of Forlì was one of two downloadable content packs available for Assassin's Creed II. It comprised the first of the two "corrupted memory sequences" of the Animus, and was released on the 28th of January, 2010.

The DLC also contained six memories, and a "special memory" that allowed the use of Leonardo da Vinci's Flying Machine over the city of Forlì.

Ezio met with Niccolò Machiavelli, Leonardo da Vinci, and Mario Auditore in Venice to study the Apple of Eden they had recently recovered from Rodrigo Borgia. After discovering the great power it possessed, the group decided to seal it away in the citadel in Forlì, which was held by one of their allies, Caterina Sforza.

Ezio set off for the city to speak with her, but shortly after he arrived, he discovered that the city had been occupied by the Orsi brothers, Checco and Ludovico, who had been hired by the Templars. Ezio infiltrated the city and escorted Caterina and her bodyguards into the safety of the Rocca di Ravaldino, in order to attempt to retake the city.

Though Caterina's forces successfully held the citadel, the Orsi brothers revealed that they had kidnapped two of Caterina's children, who Ezio was promptly sent to rescue. Upon freeing both children and assassinating Ludovico, Ezio returned to discover that the Apple had been stolen from Caterina in his absence.

Ezio tracked down and killed Checco, who had been attempting to flee with the Piece of Eden, but was stabbed near-fatally while doing so. As Ezio passed out, the Apple of Eden rolled away from him, and was picked up by a black-robed figure with a missing finger.

Ezio later awoke in Caterina's care, but quickly remembered that he needed to find the man who had taken the Apple. Caterina advised him to check the churches, as his description of the man sounded like one of the monks from the nearby countryside. Ezio eventually learned the name of the monk, Girolamo Savonarola, who studied in Florence.

Checco and Ludovico Orsi in Forlì

Ludovico watching as one of his archers is killed

Ezio on horseback, striking down Checco 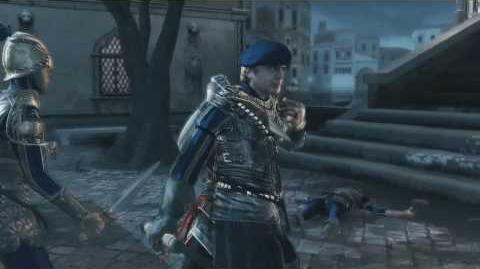 Retrieved from "https://assassinscreed.fandom.com/wiki/Battle_of_Forl%C3%AC_(DLC)?oldid=852849"
Community content is available under CC-BY-SA unless otherwise noted.