"There's nothing like a nice day at work for the Barber: Whistle a catchy tune, place yourself behind your client, adjust his chair to the perfect height, gently pass your hand under his chin, pull back his head, slowly take out your Razor and slit his throat."
―Description of the Barber.

The Barber (harvested from: Baltasar de Silva) was an Animi Avatar used by Abstergo Industries, to train the recruits in the first stage of their Animi Training Program. He used a sharp razor as his weapon.

The Barber had several unique moves:

The Barber walks towards his target and swiftly pulls out his razor from his belt, flicks it open, and uses the momentum to slash them across their neck. He then brings his razor back rapidly and cuts open his victim's jugular, leading them to choke on their own blood.

The Barber approaches his target from behind and places one of his hands down hard on their shoulder, forcing them onto their knees. Holding their chin upwards, he exposes their neck, before taking out his razor and slicing their throat. From there, his victim falls forward to the ground, dying of blood loss from their wound.

The Barber rushes towards his target as he draws his razor from its sheath, before slashing at their torso violently. Afterwards, he brings his razor back and slices upward into their throat, while they are too shocked to move, sending his victim spinning to the floor and leaving them to bleed to death.

The Barber slides along the floor from behind his target, with his razor in hand and maintaining his balance all the way, before slicing the crevice behind their knee as he makes his way around to the front of them. Twisting around rather swiftly, the Barber delivers a lethal slash with his razor to their neck, sending them spinning as they try to stem the bleeding. It is too late however, and his victim collapses to the floor, dead.

The Barber walks up to his seated target and grabs them by their head, before lifting them slightly off the bench. While they are standing with their knees bent, the Barber takes out his razor and slashes them forcefully across their neck, sending his victim falling to the ground with their jugular sliced after he releases his grip.

The Barber leaps from a rooftop and lands on top of his target, before grabbing their head and roughly slashing them across their neck. Afterwards, he folds his razor away as he stands up, leaving his victim on the floor to die from blood loss.

The Barber could be customized in several ways:

Concept art of the Barber 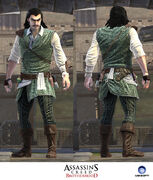 Concept models for the Barber

Early texture models for the Barber

Unofficial concept models for the Barber