Balor is a giant in Irish mythology, usually depicted as the leader of the Fomorians, a race of malevolent supernatural beings that represented the harmful power of nature and were sworn enemies to the Tuatha Dé Danann, deities from the Otherworld who had settled in Ireland. Balor himself is often interpreted as a personification of the sun due to his large eye that wreaked destruction when opened.[2]

Balor was born to the being named Buarainech, and gradually rose in power until he had attained leadership over the Fomorians. Together with his brethren, they ruled over ancient Ireland and regularly came into conflict with the Tuatha Dé Danann.[1]

Sometime during the Isu Era Balor had an encounter with the hero Cú Chulainn, who sought to kill him. Cú Chulainn was slain in the resulting battle, but not before lodging his spear Gae Bolg deep into Balor's back.[3] Over time, the wound festered,[1] and Balor took care to invisibly cloak the spear so as to conceal his weak spot from countless heroes who challenged him and failed in vain attempts to avenge Cú Chulainn.[3]

Sometime later Balor met the Æsir Odin, who at the time was using the alias of "Fjölnir" who seeked the power Balor held, and the two fought. The Two men fought but Odin was victorius, defeating Balor and retriving the Gae Bolg for himself.[3]

Eventually, Balor and his deeds passed into myth. By the late 9th century, fragments of various legends about him were gathered together and written down on a page that would later go on to form the Mythological Cycle.[1] This page was later recovered by the druidic priestess Deirdre Na Linni and kept on a table outside the window of her hut at Asfinn within the Kingdom of Connacht.[4]

Shortly after collecting the page, Deirdre met the Viking jarlskona Eivor Varinsdottir of the Raven Clan, who was visiting Ireland to see her cousin Bárid mac Ímair, but had been unknowingly embroiled in a greater plot in the country when Bárid was framed for poisoning High King Flann Sinna's army. After producing a cure with an amber shard taken from The Wren, a member of the extremist druidic cult called the Children of Danu, Deirdre informed Eivor that collecting all the amber from the Children of Danu would "give [her] the force of the blazing sun".[5]

Intrigued, Eivor hunted down and systematically eliminated the rest of the cult and gathered their amber shards.[6] Returning to Deidre, she delivered the amber, which was used to make a psychoactive mixture that sent Eivor on a hallucinogenic vision reliving the fight Odin and Balor had once had, defating the Giant in the vision by pulling the spear from his back Eivor woke up having pulled the same spear from the Monolith infront of her.[3]

Balor in the Database

Concept art of Balor kneeling in his arena 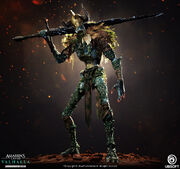 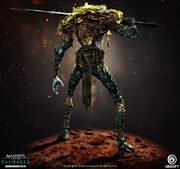 Concept art of Balor's back

Detail on Balor's head, chest, back and legs 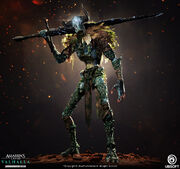 Close up of Balor's face and chest