"Father... My mother's gift was the blessing of all the realms, so that no blade, claw, venom, or spark could harm her son. I am surely grateful—but without the risk of death, what triumph is worth celebrating?"
―Baldr to Odin[src]-[m]

Baldr, alternatively Baldur, was an Isu who was revered as god of light, peace, innocence, purity and prophecy in Norse mythology. A member of the Æsir, he was one of the sons of Odin, and thus the brother of Thor and numerous others.

In both the Poetic Edda and Prose Edda, Baldr was born to Frigg. In the Prose Edda, Loki tried to kill Baldr but was unsuccessful. After asking Frigg why no object could hurt her son, she explained that it was because all objects on Earth had taken an oath not to harm him save for mistletoe, which either was deemed too unimportant to consider asking or was too young to swear an oath. With this knowledge, Loki immediately created a mistletoe arrow and tricked Baldr's blind brother Höðr into loosing it when the Æsir playfully tested Baldr's fabled invulnerability, killing the god.[1]

"Mistletoe... symbol of hope. Renewal... but not for Baldr."
―Sinmara gloating to Odin over causing Baldr's death[src]-[m]

During the Isu Era, Odin imprisoned Loki's son Fenrir over his fated role to kill Odin during Ragnarök. Outraged at Fenrir's unjust treatment,[2] Loki secretly told the Muspels how to poison Baldr with mistletoe[3] and left Odin to grieve over the loss of his child.[2][4]

Baldr had a totem named after him in the popular dice game Orlog, played during the 9th century. The piece "Baldr's Invulnerability" would earn players extra helmets and shields for each die that rolled either of those icons. An Anglo-Saxon man at the Ragnarsson War Camp for the Great Heathen Army in Ledecestreshire possessed the piece, which he gave to the Viking shieldmaiden Eivor Varinsdottir of the Raven Clan after being defeated.[5]

In 881, the King of Dublin Bárid mac Ímair cursed Flann Sinna using Baldur's name in exasperation for not heeding his warning of an incoming attack.[6] 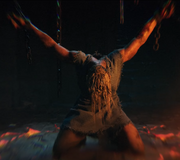 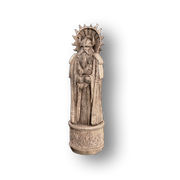 A toy of Baldr based off his Sigrblot statue

Baldr statue during the Sigrblot festival in Ravensthorpe