Bachir Al-Djallil (unknown – 1340) was a rich Egyptian merchant living in Cairo in 1340. Having participated in the theft of the Scepter of Aset with the Templars, Al-Djallil was attacked in his home by the Assassin Numa Al'Khamsin, who wanted to know where the Templars had brought the artifact.

After having been tied up and tortured by Al-Khamsin, the infamous merchant revealed that the Templars were at Karnak. Al-Djallil was then executed by the Assassin for his involvement in the conspiracy, as well as the raping and killing of many young girls.

Bachir under attack by Numa 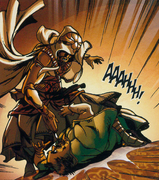 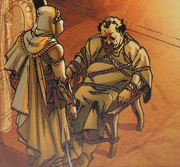 Bachir tied up in a chair

Numa interrogating Bachir
Add a photo to this gallery

Retrieved from "https://assassinscreed.fandom.com/wiki/Bachir_Al-Djallil?oldid=787507"
Community content is available under CC-BY-SA unless otherwise noted.