Bárid mac Ímair (died 881) was the Norse-Gaelic King of Dublin who reigned in late 9th century Ireland. He was the son of the Viking leader Ímair and had a son named Sichfrith with Sadhbh. Through Rosta, he was a cousin of jarlskona Eivor Varinsdottir of the Raven Clan.

Born in Norway as the son of Viking leader Ímair, Bárid was present when his aunt Rosta and her husband Varin came to stayed with his family during a plague outbreak. There, he bore witness to the birth of his younger cousin, Eivor and would often slip out to hunt alongside her.[1] Later on, Bárid lost contact with Rosta and her family after following his father to Ireland. They settled down in Dublin, a new Viking settlement originally founded years ago by Thorgest, with Ímair as its king.[2]

Following Ímair's death and Dublin's destruction in 873 as a result of a siege by the Irish kingdoms, Bárid ascended the throne and worked to rebuild the city to its former glory.[2] He employed the Persian trader, Azar, as his advisor to set up a trade network across the world and attempted to build relations with the kingdoms of Ireland, including Flann Sinna, the king of Meath. Around this time, Bárid became friends with the Irish poet Ciara ingen Medba and also spent time trying to deter Viking raids conducted by Thorstein the Red, the son of the Dublin king Olaf the White, who once ruled alongside Ímair.[1]

In 879, Bárid sent Azar to England to establish a trade route with the settlement of Ravensthorpe in Ledecestrescire. Discovering that his long lost cousin Eivor was now jarlskona of the settlement, Bárid also sent an invtiation to invite her to visit him in Dublin.[3] 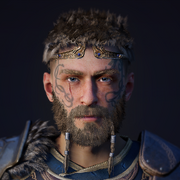 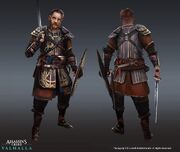