Assassin's Creed Wiki
Register
Don't have an account?
Sign In
Advertisement
in: Articles that need updating, Individuals, Persians,
and 3 more

Azar was a Persian merchant who operated in Dublin, Ireland during the city's occupation by the Vikings in the 9th century.

Originally from the Persian city of Shiraz, Azar was vital in assisting King Bárid mac Ímair in his vision to develop and turn Dublin into a prosperous and important trading post during the 9th century.

Azar was born into a wealthy family in Shiraz, a city in the Abbasid Caliphate. Showing a natural and shrewd talent for commerce and trade, her father placed his growing commerce business in her hands. With the commerce industry being heavily dominated by men, Azar decided to adopt a masculine name and mannerism which eventually led to the discovery that she was gender fluid. As per her wish, Azar's friends continued to feminine pronouns while her family's wealth and influence protected her from much scrutiny.[1]

Around this time, Azar came to work alongside Konstantinos, a former friend of her father's which became her partner. In time, Konstantinos became consumed by greed and power and sought to claim the family business for himself. He had Azar's family killed and while she managed to escape to safety, she lost an eye in the process.[2]

Azar fled from Persia and travelled north and westward towards Europe. After wounding up in the Ireland, Azar entered the services of Bárid mac Ímair, the King of Dublin who also had a passion for trade and commerce, and sought to turn Dublin into a prosperous trading settlement. Becoming his most trusted advisor, Azar was tasked to establish trade with the various kingdoms and empires throughout the known world.[2]

Around 879, Azar made contact with the Hidden One Hytham, who was based in the Norse settlement of Ravensthorpe in Ledecestrescire, England. This also led to the discovery that the settlement's jarlskona Eivor Varinsdottir was a long-lost cousin of Bárid's. Azar was thus sent by Bárid to establish a trading post in the settlement, as well as to send an invitation to Eivor to invite her to Ireland.[3]

Making her way to England, Azar's ship was stalled by a blockade placed at the mouth of the Nene River. She was thus forced to leave her boat eventually found her way to Ravensthorpe's docks. Upon arriving at the docks, Azar was greeted by Eivor and, not knowing of Eivor's identity, asked for Hytham's whereabouts. Hytham arrived shortly thereafter and Azar was thus introduced to Eivor, learning of her position as the settlement's jarlskona. She informed Eivor of Bárid's invitation to Ireland though the jarlskona was not aware of Bárid's position in Ireland. Regardless, Eivor assisted the merchant in eliminating the blockade, while Azar remained in the settlement to settle down and search for Bárid's invitation letter.[3]

After the blockade was cleared, and the trading post was built, Azar presented Eivor with the Bárid's letter, which the latter recognised as her long lost cousin that she had lost contact with. Eivor thus agreed to join Azar to travel to Ireland to meet Bárid and two departed on Eivor's longship.[4]

Azar in the Database 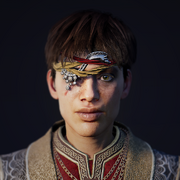