Atlas was an Isu and one of the sons of Poseidon, the ruler of Atlantis. He was the brother of Azaes, Gadiros and Ampheres.

During the Isu Era, Atlas was one of at least ten brothers fathered by Poseidon along with Diaprepes, Mestor, Azaes, Ampheres, Gadiros, Elasippos, Mneseas, Evaimon, and Autochthonos. As a child, he studied the work of Consus under the guidance of Juno and was able to adapt the specialties of his siblings to acquire a broad range of skills.[1]

Atlas assumed the throne of Atlantis, one of the Sister Realms, and served as its first king. His position, however, was usurped by his father who sought power for himself. Atlas was instead given the subordinate role of Archon which he shared with his brothers but Poseidon expected Atlas' talents would allow him to eventually retake the monarchy through inheritance.[1]

In a simulation created by Aletheia, the misthios Kassandra encountered Atlas during her time as the dikastes of the city.[1]

Elpis, lover of Atlas wanted to rule beside him. Unfortunately, Atlas didn't see it that way. When Elpis obtained some raw adamant with the help of Kassandra[2], she created an Isu device that could mix Isu DNA with her human DNA. After Kassandra provided an distraction, Elpis was changed into a hybrid. An angry Atlas tried to attack Kassandra, but was accidently shot to death by the changed Elpis with a directed energy beam. After his death, Azaes gave Atlas' position to Elpis.[3]

Atlas is a mythical figure and character appearing in Assassin's Creed: Odyssey. He is mentioned by Plato in Critias as one of the ten kings of Atlantis and the twin brother of Gadiros. 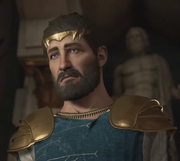