The Atlantic Ocean is the world's second largest ocean and the main line of division between the "Old World" of Europe, Africa and Asia to the east, and the "New World" of North and South America to the west.

During the Age of Discovery, European explorers began to regularly cross the Atlantic Ocean and discovered the various lands of the Americas, which was soon followed by colonization. For European travelers, a voyage over the Atlantic Ocean spanned six weeks at best, but could take several months in extreme cases, such as storms, seasickness and short food supplies.[1]

The Europeans also voyaged the Atlantic to transport African slaves to the colonies in the New World. For slaves, the voyage was even worse, as they were kept below the ships' decks, bound in chains, rarely allowed to go out for fresh air, only being given a meal once a day and plagued by disease.[1]

The North Atlantic extends northward from the equator to the Arctic Ocean. Its frigid northernmost region is trademarked by areas covered in sea ice and frequent blizzards, making it difficult to navigate. Many of the shipwrecks in the region were the results of failed attempts to locate the Northwest Passage.[1]

During the 18th century, the Gulf of Saint Lawrence and the coast of Nova Scotia were explored by the Assassin-turned-Templar Shay Cormac. However, some parts were blocked off by thick sheets of ice, preventing Shay from accessing them until he had made the necessary upgrades to his ship, the Morrigan.[2]

Concept art of the North Atlantic

A map of the Atlantic Ocean 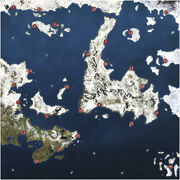 Map of the North Atlantic