"HQ has given the go-ahead to extract the resource. Negotiations are over. F. is planning to give the vote to everyone. Reason just doesn't work with someone like that."
―Extract from an Abstergo letter sanctioning the assassination, c. 1963.[src]

The assassination of John F. Kennedy, the 35th President of the United States, also known as Operation: New Frontier, was an event organized by the Templars, who wanted to remove Kennedy with the intention of taking control of the United States,[1] which was secretly hijacked by extremist Assassins under Boris Pash.[2]

John F. Kennedy was the President during the 1960s, a time where America was determined to send a man to the Moon, safely landing and then returning to Earth; this was very important for the Templars as they knew of a Piece of Eden that was located on the Moon. Unfortunately for them, Kennedy did not share their motives and so this proved "inconvenient" to them.[1]

Also, Kennedy's suspicions regarding the Central Intelligence Agency (CIA) proved to be a factor contributing to the Templars' need to get rid of him. He reportedly cut their funding and wanted to find out what they were really doing, therefore worrying the Templars.[1]

The assassination was a plot created by the Templars to remove Kennedy, who was planning to drastically reform civil rights in the US, from power. They also wanted to obtain his Piece of Eden and place Vice President Lyndon B. Johnson in power.[1]

Simultaneously, the Assassin extremist Boris Pash sought to obtain Kennedy's Apple of Eden for himself, and placed his own agent within the conspiracy: William Greer, a US Secret Service agent, who would operate as Kennedy's driver.[2] While Abstergo tasked Greer to bring the Apple to Abstergo,[1] he would instead take it back to Pash.[2]

As per Abstergo's plan, their sleeper agent Lee Harvey Oswald would pull the trigger and Abraham Zapruder, who would film the event on camera, would perform the assassination should Oswald be unable to do so.[1] Instead, shooters from the Bloodstone unit under Pash's command killed Kennedy, coordinating it in such a manner to frame Oswald.[2] Greer drove Kennedy's vehicle and would slow the vehicle down in the event that Kennedy was not killed with one shot. The Templars would then use their own Apple of Eden to create a diversion in the shape of a phantom appearing on a nearby hill behind Zapruder, giving Greer an opportunity to steal the president's Apple.[1]

The assassination plot was performed according to plan. Following Kennedy's death, Johnson was sworn in as President only hours later. Greer was able to secure the Apple,[1] but was ambushed in a nearby alley by fellow Assassin Alekseï Gavrani, who previously worked under Pash. Gavrani punched Greer and took the Apple back to the Brotherhood, and was tasked with stopping the rest of Pash's plans.[2]

Kennedy's death allowed for the Templars to launch Apollo 11 in 1969, using the project as a front to recover another Apple from the surface of the Moon.[1]

Kennedy seconds away from death 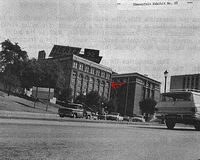 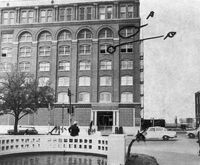 Eyewitness Howard Brennan stands across from the TSBD