The Assassin Gauntlet was a modification adopted during the 19th century to the standard Hidden Blade. Built around a bracer that covered the entire forearm, it consisted of two main parts, the Hidden Blade and a rope launcher attachment.

By the Victorian era, later models replaced the rope launcher with an Assassin insignia-shaped grappling hook, allowing the wielder the means to a quick escape, or to facilitate urban travel by creating on-the-fly ziplines under the palm. These models also featured armor plating that partially or completely covered the glove, as well as embedded brass knuckles and a Dart Gun on the back of the forearm, which was used to launch poison darts at unsuspecting targets.[1]

The first known use of the gauntlet was in 1852 by an unnamed American Assassin. During the California Gold Rush, she was made aware of the actions of John Sutter, a Swiss pioneer forcing the local Maidu people to mine gold for him. Ambushing his carriage in the Great Basin Desert, the Assassin fired a tether from her gauntlet, using it to mount the vehicle before ordering Sutter at gunpoint to return the gold he had stolen from the Maidu.[2]

In 1863, during the New York draft riots, the Assassin Varius noted that newer gauntlet designs, involving rope launchers and darts, were being used in England.[3] In 1868, the twin British Assassins Evie and Jacob Frye made it their mission to take back London from the British Templars, who had ruled with an iron fist for the past century. The Rooks were created from the gang known as the Clinkers to counter the Templar-affiliated Blighters, and following a gang war with the gang leader Rexford Kaylock and his demise, the Fryes took possession of his broken grappling hook pistol.[1]

Believing the pistol could still prove useful, Henry Green introduced them to the inventor Alexander Graham Bell, who then modified the launcher to fit into the Fryes' gauntlets. Bell later added a Dart Gun to the bracer, allowing the twins to fire hallucinogenic darts at their targets. The design remained relatively unchanged for the next fifty years, being used by Lydia Frye during her efforts in World War I to protect London from the Templars and German spies.[4]

*Only available after downloading Jack the Ripper.

The Dart Gun of the Assassin Gauntlet is similar to both the Hidden Gun and the Phantom Blade, as it acts as a firearm and is silent.

Varius' description of the gauntlets used in England appears to refer to the gauntlets worn by the Frye twins, despite the fact that, at the time, theirs had not yet been modified to include a rope launcher and dart gun. 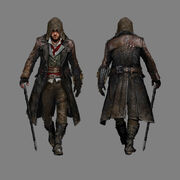 Concept art of the Assassin Gauntlet

Evolution sketches of the Assassin Gauntlet

A prop of the gauntlet