The Assassin Elder was a member of the Egyptian Brotherhood of Assassins.

He then revealed to the younger Assassin that the Assassin Brotherhood had played a role in the fall of the Ayyubid dynasty in Egypt a hundred years earlier, by giving the rebels a Piece of Eden, the Scepter of Aset. Egypt had experienced a period of prosperity under the Bahri dynasty ever since, but the Scepter had been stolen by unknown assailants who had only left the fragment of a dagger's handle behind. To Numa, who wondered why the theft of such an object of decorum was so important, the old man revealed that the Scepter had real powers, as its wielder was imbued with great charisma and influence.

The Elder then entrusted him with the mission to retrieve the Scepter and Numa returned to the boat where his apprentice Ali Al-Ghraib was waiting and headed for Cairo, where the Scepter had been stolen. 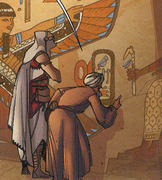 Retrieved from "https://assassinscreed.fandom.com/wiki/Assassin_Elder_(1340)?oldid=799119"
Community content is available under CC-BY-SA unless otherwise noted.