In Assassin's Creed II, the Assassin Ezio Auditore da Firenze is able to obtain several outfits. Once an outfit is unlocked and equipped, it will alter Ezio's appearance. Some of these outfits affect gameplay elements, while others are purely cosmetic.

The Plain cape is available after acquiring Giovanni Auditore da Firenze's robes, and has no effect on notoriety.

The Medici cape is gifted to Ezio by Lorenzo de' Medici, following the death of Jacopo de' Pazzi. While the cape is worn, Ezio remains incognito in Florence and Tuscany. However, the guards still react to unusual behavior.

The Venetian cape is also unlocked after completing Sequence 11. While the cape is worn, Ezio remains incognito in Venice and Romagna. As with the Medici cape, the guards still react to unusual behavior.

The Auditore cape is unlocked by collecting and depositing 100 feathers scattered throughout Italy. The cape raises Ezio's social status to notorious, for as long as it is worn. Wearing this cape in every region, including the Apennine Mountains, rewards the Show your colors achievement.

Altaïr Ibn-La'Ahad's robes can be purchased from Uplay for 30 Uplay points. The robes feature the amputated ring finger, and a short blade sheath on the back, despite Ezio sheathing all the daggers at his waist.

Worn only during Sequence 9. The outfit features two masks, a metal and a golden one. It also has a unique black cape with gold colored designs.

Worn only in the memories Play Along and All Things Come To He Who Waits.

Worn during the Boys Will Be Boys, You Should See the Other Guy, Sibling Rivalry, Nightcap, Paperboy, Petruccio's Secret, Beat a Cheat, Friend of the Family, Special Delivery and Jailbird memories. 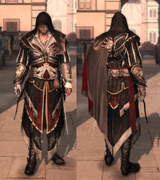 Armor of Altaïr
Add a photo to this gallery

Retrieved from "https://assassinscreed.fandom.com/wiki/Assassin%27s_Creed_II_outfits?oldid=879096"
Community content is available under CC-BY-SA unless otherwise noted.