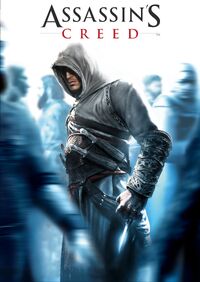 Assassin's Creed is a sandbox style action-adventure game developed by Ubisoft Montreal and published by Ubisoft. The game was released for the Xbox 360 and Playstation 3 in November 2007 and for PC in April 2008.

The game centers around the use of a machine dubbed "the Animus", which allows its user to view the genetic memories of his or her ancestors, specifically a bartender named Desmond Miles. As Desmond relives the memories of one of his ancestors, the Assassin Altaïr Ibn-La'Ahad who lived in the Holy Land during the Third Crusade, details of a battle between two ancient sects, the Knights Templar and the Assassins, emerge as both scour for an artifact known only as a "Piece of Eden".

The game received primarily positive reviews, for both its story and its gameplay, and received several awards at the 2006 E3. In November 2009, Assassin's Creed II was released as a sequel. (read more...)