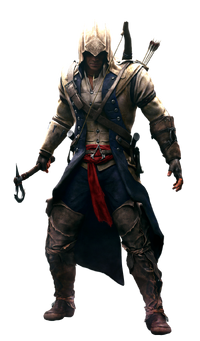 "I realize now that it will take time, that the road ahead is long and shrouded in darkness. It is a road that will not always take me where I wish to go – and I doubt I will live to see it end. But I will travel down it nonetheless."
―Ratonhnhaké:ton, 1783.[src]

Ratonhnhaké:ton (1756 – unknown), often known by the adopted name of Connor, was a Kanien'kehá:ka Assassin during the period of the American Revolutionary War, and is an ancestor of Desmond Miles, through the paternal line.

Ratonhnhaké:ton was born to the Templar Haytham Kenway and Kaniehtí:io, a Kanien'kehá:ka woman from the village of Kanatahséton. In 1760, while he was still a young child, he was assaulted by Charles Lee and other members of the Templar Order seeking the spirit sanctuary his people guarded, and then watched as his village burned down and his mother died.

Growing up concerned by the outside world's impact on his people, Ratonhnhaké:ton joined the Assassin Order to prevent the Templars from returning. Finding the Templars had all but destroyed the Colonial Assassins, Ratonhnhaké:ton convinced Achilles Davenport to train him. Using Connor as an adopted pseudonym, he revitalized the Order by recruiting craftsmen to renovate the Davenport Homestead and the Assassin ship, the Aquila. Robert Faulkner subsequently trained him to captain the ship, while Ratonhnhaké:ton inducted six more Assassins into the Order. (read more...)