"In the spirit of building on past Assassin’s Creed adventures, it was only natural to partner with Piggyback on this guide. Working closely together, we have made sure this book is totally comprehensive; from the main storyline to all side quests and background analysis, from all secrets to specifics on the most difficult challenges. Every detail has been compiled here in order to enhance your gaming experience; all information has been carefully presented so that you advance through the game at your own pace."
― Martin Schelling on the Assassin's Creed: Revelations official guide.

It tells mostly everything about Assassin's Creed: Revelations, including a walkthrough of all the sequences in the game, along with help with controls, side quests, multiplayer, and a detailed analysis of all things inside the game. It also includes a lot of never before seen artwork.

The Primer chapters are designed to help the average Assassin's Creed fan ease into the series with confidence, focusing on basic features for both the Xbox 360 and PS3. This includes button definitions, game objectives, maps, movements and abilities, and also the combat system and threats and detection.

The Walkthrough chapter of the official guide is designed to help and advise players throughout the main missions. It offers explanations, tutorials and tactics whenever new features, abilities or game concepts are introduced into the game. Overall, it presents the best path to receiving a 100% completion in the game.

These chapters are for dedicated players seeking a perfect playthrough, where one can learn about systems and statistics of weapons, armor, outfits, shops, enemies, achievements, missions, checklists and more.

The Multiplayer chapters begin with the basic principles of the game, and is useful to those just starting out in multiplayer. It explains the different game modes featured in multiplayer, along with some helpful notes and strategies.

To help get a feel of the multiplayer personas, the guide introduces the reader to all of the multiplayer characters with their real names and availability. Score and progression follows, providing information on the ranks of the game by specifying the scores given to kill, approach, action and session bonuses, along with the XP (experience) required for leveling up.

The next chapter of the multiplayer guide presents statistics on abilities, as well as streaks and accolades achieved throughout the game. The last few chapters explain the challenges and titles unlocked in the game, along with some advanced tips for veterans.

From there, it finishes with map analysis by providing a bird's eye view over the multiplayer maps and giving tips for each map to help enhance gameplay for all Templar agents.

The Extra chapters contain bonus material, which is filled with spoilers, so it's best to leave it until after the game's main story has been finished. It also contains the story recap and glossary, where it explains key events of the Revelations storyline.

Continuing on, the guide then explains the key factors of the game including the Animus, the Bleeding Effect, Eagle Vision, Pieces of Eden, the Masyaf keys (Memory Seals) and the Codex. It also explains the role of the prophets Altaïr and Ezio, and the prophecy assigned to them by the First Civilization.

Lastly, the story recap gives information on Adam and Eve, the First Civilization, the Capitoline Triad, the Toba catastrophe and the symbols seen throughout the games.

After this, in the last section of the guide, it provides insight into untold events from Altaïr's life. These events were:

Ahmad Sofian's suicide after the death of Umar Ibn-La'Ahad, Altaïr revealing this to Abbas Sofian, Abbas' attack on Altaïr, and Altaïr's training to became a Master Assassin. These all took place before the first Assassin's Creed. The other events were scattered throughout his life, and were:

Altaïr's visit to Constantinople, Altaïr, Maria Thorpe and Darim Ibn-La'Ahad's travel to Mongolia, Altaïr discovering the secret of his Apple of Eden, and Altaïr's finding of the Memory Seals and the construction of his library.

The guide then finishes with a bird's eye view of the fortress of Masyaf. 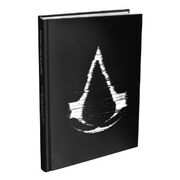