Jonathan Hawk was sent by a suited executive and a lab technician to relive Accipiter's memories. He was sent to 259 CE, when Accipiter's Alamanni were crossng the Rodanus into Genava and Aube to face the Roman forces at Oppidum. The battle raged bloodily and long, but Accipiter's forces were eventually victorious. Accipiter was met by the Iberian Assassin Cuervo after the battle, the latter coming to congratulate the Alamanni on their victory and to discuss the future. Cuervo had concerns about the Alamanni approaching Lugdunum, a well-fortified city important to the Assassins. Cuervo and Accipiter worked out a plan for the Alamanni to have a secret meeting with the prefect of Lugdunum. They would demand a ransom for the sparing of the city, in return for which Lugdunum wouldn't be ravaged. This would prevent the Alamanni from appearing weak, as well as safeguarding the Assassin investments in the city.

However, the technician removed Hawk from the memories, citing physiological and psychological safeguards for Hawk's protection. The executive understood and allowed Hawk a two-hour respite.

Meanwhile, Desmond was back in the Animus for Aquilus's memories: Aquilus returned home, passing by Caius Vultur's home. Remembering what the senator had done, Aquilus waited for cover of darkness to infiltrate the senator's home. A guard sounding the alarm was quickly silenced, but not before the household was alerted. Several guards had to be put down before one would confess his master's location: Vultur was hiding in his personal chambers. When Aquilus demanded that he present himself, Vultur stabbed a spear through the door and into his own man. Aquilus broke down the door and accosted Vultur. Though the senator first tried to bribe and then begged for his life, Aquilus was disinclined to let him live.

Before killing the senator, Aquilus demanded the return of the stolen Ankh. Vultur told Aquilus the history behind the artifact. The Ankh had been used by the Egyptian goddess Isis to protect the Pharaohs of Egypt, but when Osiris, her husband, died, she used it to revive him so their union could result in Horus's conception. This use of the Ankh revealed its purpose: raising the dead. The cross was later discovered in a pyramid by Roman looters and passed down through various owners who were unaware of its purpose. When Aquilus demanded the stolen artifact's return, Vultur lashed out with the Ankh, only to be stabbed to death. Aquilus performed a Leap of Faith out the window into the night.

While Desmond was in the Animus, Lucy checked in with Rebecca. Rebecca remarked that the recording was going well. Desmond seemed to be remarkably well-suited to being an Animus test subject, as he had so many ancestors that were worth investigating and his DNA captured a lot of detail from his ancestor's memories. Rebecca also commented on the possibility of Lucy's feelings for Desmond, only to be strongly rebuffed.

Desmond viewed Aquilus returning to his own villa. He was met by Valeria, his wife, at the door. Glad to be home, he told her that Vultur was dead and the Ankh recovered. Though warning her that his work was not done, the couple retired to the marriage bed to reacquaint themselves.

Lucy woke Desmond as intruders snuck into Monteriggioni, dressed in suits like the first mercenaries the modern-day Assassins faced. Lucy and Desmond dealt with the intruders quickly, and, although Lucy was almost killed by the last mercenary, Desmond was able to cover her. They kissed, but Lucy quickly suppressed the emotions of the moment, citing the Assassins' need to finish the job. Not knowing who had attacked them, Lucy asked about a nearby statue. Desmond couldn't place the statue's importance, thinking that it had belonged to the previous owner.

Hawk, meanwhile, was sent back into the Animus to view Accipiter's memories. Accipiter was meeting with the prefect to demand the ransom for Lugdunum's safety. Though the prefect initially appeared unwilling to comply, Accipiter's threat revealed the bluff to be the prefect saving face. As the tribute was delivered, Accipiter overheard the prefect planning Aquilus's arrest and murder. Accipiter sent his men back with the loot while he himself went to Lugdunum.

Desmond and Lucy met back with Shaun and Rebecca, assuring them the area was secure. Shaun had discovered that Aquilus had an ancestor, Lugos, whose name meant "Raven", much like Cuervo's.

Once all was said and done, the Assassins all agreed that since the Templars had found them at Monteriggioni it was no longer safe and they would need to leave the Villa as soon as possible. Desmond, rather than wait around, decided to dive back into Aquilus's memories, though Lucy tried to stop him, fearing that he was pushing himself to far. Desmond, however, managed to convince her that they needed the information and that they where running out of time as it is. Aquilus showed his wife the Ankh and told her of its power. She was terrified of the dead's potential return, but Aquilus assured her that the bond was temporary. The Ankh served as a kind of recording device—it recorded the mannerisms of the individual who used it, and could be used to return those mannerisms to the corpse. Aquilus deduced that this artifact had to have been created by a previous, now-lost civilization.

Aquilus activated the Ankh, suspecting that his father had left him a message. His suspicions were well-founded—Lucius's hologram appeared in the Ankh's loop. It told of Vultur's betrayal and that the Assassin's task was to safeguard the Liberalis Circulum, another name for the Assassin Order. It also mentioned that they needed to find Lugos, an older member of the Assassin Order. Before the hologram could finish telling Aquilus about the importance of the Ankh, the prefect's soldiers burst into the villa on the pretense of arresting him for the murder of Faustin. Aquilus admitted to the murder on the grounds of Faustin's treason. Though he attempted to flee, the soldiers knocked him unconscious and chained him.

Accipiter later arrived at the villa, only to hear of Aquilus's arrest and his captors' departure for Rodumna. Accipiter and Valeria were chained and on the road to Rodumna, where the Roman officials had fled. When the prison caravan was attacked, Aquilus was killed by a Roman soldier. The shock threw Desmond out of the memories, screaming. When he was calmed down, Desmond mentioned his suspicion that Valeria was pregnant and immediately demanded to dive back into the memories. Lucy again tries stop him fearing that he had not yet recovered from the shock of his ancestor being murdered, however, Desmond insisted telling Lucy that seeing his ancestor died without honor had left him more shaken and that he needed to see that he did not die for nothing.

As Desmond watched through the Animus, Accipiter arrived to see Valeria screaming of her husband's death. He carried her and the body away until he was sure they weren't being followed. They made camp, and Valeria filled in the missing details for him. Unfortunately, Lucius had been killed before telling them where Lugos was, and so the Ankh's message held no more secrets for them. Accipiter had Valeria take the Ankh and hide it within a shrine for Aquilus's memory, as he doubted that they could operate the device with their limited knowledge.

Desmond emerges from the Animus and took Lucy back to the statue. They move a loose stone and find the Ankh hidden within. Taking it back to Rebecca and Shaun, they play back another message recorded on it. Apparently, Lugos' ship had sunk in the Mediterranean and with it another Piece of Eden. While the team was debating the chances of its recovery, Desmond received a phone call from someone calling herself Stella Crow, another Assassin. She demanded that Lucy give Desmond the "Folder 24", in order to deliver it to an agent arriving to claim it. Lucy gave Desmond the folder, saying that it was delivered by courier and not to be given to Desmond before Crow's call.

As Desmond was opening the folder, Hawk arrived at the door. Rebecca let him in, knowing Hawk to be a member of another cell. Shaun speculated that Hawk was Desmond's replacement in the Animus for the current project. Hawk claimed that his team was supposed to take over the mission for Lucy's cell and announced himself as Accipiter's descendant, thus having, in a way, met Desmond through the Animus. As the five of them pored over the folder, no one knew how the parameters of the mission had changed, but a photo of Giza suggested that Egypt featured as a location. 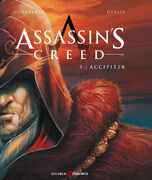