Assassin's Creed is a non-canonical, sixteen-page graphic novel that was included in the limited edition of Assassin's Creed, and showed two side-stories of Altaïr Ibn-La'Ahad and Desmond Miles.

The novel was also distributed to EB Games store managers in 2007 to promote the game. The story served as a prelude to the first Assassin's Creed game, and introduced the game's two main protagonists.

"I track these men so that I might know the truth."
―Altaïr Ibn-La'Ahad explaining his life as an Assassin

The story of the novel commenced with Desmond Miles and his escape from the Abstergo Industries facility in the year 2012, but changed sides later on as Desmond interacted with the Animus and experienced a memory of Altaïr from the year 1191. Altaïr was tasked with performing multiple assassinations of Templar knights within the city of Acre.

Both sides of the narrators' stories were synched with each other and had the same message portrayed in two different time contexts. Desmond introduced himself first in the beginning of the novel by explaining who he was and what had happened to him. He described himself as being a prisoner, and that he did not know what these men wanted or why they had abducted him.

Later, Desmond synchronized with Altaïr's memories and the latter explained himself as being a hunter, and that he hunted these men to learn who had led them and what they had planned. This created a link between the two Assassins where both of them explained who they were and what they did. Towards the end of the story they both re-introduced themselves as being Assassins and that that was their life.

In Desmond's introduction he was seen moving across the outside of the complex and avoiding Abstergo security guards who had pursued him throughout the facility. He entered and silently traveled through the vents of the facility and was almost caught by one particular guard. The man was suspicious of noises heard in the vents but later dismissed it as nothing and continued patrolling his sector.

Desmond was then seen crouched directly behind the guard in an opening in the vent as the guard responded to concerns from his colleague and stated that his sector was clear. Desmond then sneaked behind the board of Abstergo and entered a large room that contained the Animus. He stepped up to it and laid his hand on the device. The Animus glowed powerfully in response, and Desmond was then transported into his subconscious mind when he experienced the machine's recreation of Altaïr's assassination memory.

Desmond viewed Altaïr's memory in which he walked through the streets of Acre, and entered a narrow alleyway where he assassinated a Templar knight. After the guard was dispatched Altaïr scaled a nearby wall to avoid being detected. The next scene depicted multiple guards who eyed the city streets and were unware of Altaïr moving swiftly across rooftops in the background.

He leapt across the side of a building and was spotted by a rooftop archer. Just as the archer cried out in alert, Altaïr stabbed and pulled him off the ledge. The archer fell to the ground below and attracted the attention of numerous other guards.

Altaïr responded instantly and jumped down onto the back of a guard, which killed him when Altaïr slammed the guard's head into the ground. The story then flashed back to the future where the board members discovered Desmond laying down in the Animus. Desmond sprung to his feet and escaped the Animus room being chased by Abstergo officials.

The story then flashed back to the past where Altaïr was engaged in a battle with Templar guards and was fighting them back. Then the memory was desynchronized and lastly showed Altaïr retract his Hidden Blade, with the guards laid dead at his feet, and Desmond cornered by the board members. He was poised and ready to fight.

The maneuver Altaïr performed (where he stabbed and pulled down a rooftop guard off a ledge in Acre) was very similar to how, in Assassin's Creed II, Ezio Auditore was able to pull guards down from high spots after he assassinated them. In the graphic novel Altaïr carried no weapons at all but the Hidden Blade. The outside of the Abstergo laboratory could be seen in the graphic novel.

A loud noise was heard in the vents, which alerted the guard, but became quiet.

Desmond opened the door to the room that contained the Animus.

The door closed loudly behind Desmond, who touched the Animus, and reacted as the Animus glowed powerfully in response to Desmond's touch. The Animus then transported Desmond's mind into its projection of his ancestor's memory.

Altaïr silently stepped up behind the knight, and assassinated him.

​Altaïr was seen by an archer.

Altaïr stabbed and pulled the archer off the ledge. The archer's descent attracted the attention of multiple guards down below, and Altaïr responded instantly when he leapt down and killed one of the guards after he slammed the guard's head into the ground.

Desmond then awoke from the Animus after he was discovered by Abstergo officials.

Altaïr scaling a wall after assassinating a Templar 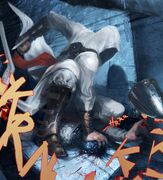 Altaïr landing on a guard and smashing his head against the ground
Español Русский Українська
Community content is available under CC-BY-SA unless otherwise noted.