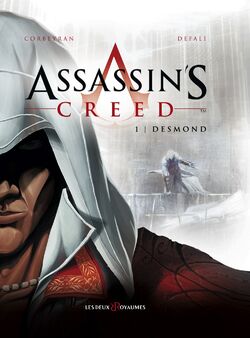 Assassin's Creed is a series of graphic novels consisting of several volumes, originally published in French for Canada and France. While the original volume was primarily based on the storyline of Assassin's Creed and Assassin's Creed II - though notably different - the second and third issues shifted their focus to a completely original storyline based on the characters Aquilus and Accipiter, while also borrowing elements from Assassin's Creed: Brotherhood. A second trilogy was later released with the story now focused on a new ancestor, Numa Al'Khamsin, and a new modern Assassin, Jonathan Hawk.