Assassin's Creed: Valhalla is the upcoming twelfth main installment in the Assassin's Creed series developed by Ubisoft.[1] In the game, the player takes control of Eivor,[2] a viking who participated in raids in England.[3]

Driven from Norway by endless wars and dwindling resources in the ninth century AD, players will lead Eivor’s clan of Norsemen across the icy North Sea to the rich lands of England’s broken kingdoms. Players must carve out a new future for their clan, reliving the ruthless fighting style of Viking warriors with a revamped combat system that includes the ability to dual-wield weapons against a greater variety of enemies than ever before.

Ubisoft Montreal is the lead development studio on Valhalla, working with other 14 studios on the game.[5] The game having been in-development for 2 years as of April 2020, is led once again by Assassin's Creed: Origins and Black Flag creative director Ashraf Ismail,[6] with Darby McDevitt as the narrative director.[7] McDevitt, aware of the similarities between 2018's God of War believes that Valhalla can stand out as a game more rooted in historical accuracy rather than mythology.[8]

The game's working title, "Assassin's Creed: Kingdoms" was first leaked in April 2019,[9] misidentified as "Assassin's Creed: Kingdom",[10] after people found what appeared to be an easter egg for the game within a map in Tom Clancy's The Division 2. In it a poster reading "Valhalla" with a Viking character holding a sphere reminiscent of an Apple of Eden led to speculation about its relation to the Assassin's Creed series, which in turn led to journalist Jason Schreier confirming the setting and codename for the game.[9]

On 29 April 2020, the game was officially announced by Ubisoft with an 8-hour art livestream by Boss Logic.[11] The cinematic trailer was then premiered on 30 April at 8AM PDT.[12] 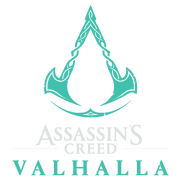 Retrieved from "https://assassinscreed.fandom.com/wiki/Assassin%27s_Creed:_Valhalla?oldid=865527"
Community content is available under CC-BY-SA unless otherwise noted.