Assassin's Creed: Renaissance is the unabridged audio version of the novel of the same name written by Oliver Bowden. The audiobook was first performed by Gildart Jackson and was released by Penguin Books on April 16, 2012. A second edition performed by Gunnar Cauthery was released on November 21, 2013.

Betrayed by the ruling families of Italy, Ezio Auditore embarks upon an epic quest for vengeance. To eradicate corruption and restore his family's honor, he will learn the art of the Assassins. Along the way, Ezio will call upon the wisdom of such great minds as Leonardo da Vinci and Niccolo Machiavelli, knowing that survival is bound to the skills by which he must live.To his allies, he will become a force for change in his fight for freedom and justice. To his enemies, he will become a threat dedicated to the destruction of the tyrants abusing the people of Italy. So begins an epic story of power, revenge, and conspiracy.[1]

Penguin presents the unabridged, downloadable audiobook edition of Assassin's Creed: Renaissance, a new novelisation based on one of the biggest gaming-media franchises in the world.

Read by the actor Gunnar Cauthery.

'I will seek Vengeance upon those who betrayed my family. I am Ezio Auditore di Firenze. I am an Assassin...'

The Year of Our Lord 1476—the Renaissance: culture and art flourish alongside the bloodiest corruption and violence. Bitter blood-feuds rage between the warring political families of Italy.

Following the murder of his father and brothers, Ezio Auditore di Firenze is entrusted with an ancient Codex, the key to a conspiracy that goes back to the centuries-old conflict between the shadowy Templar Knights and the elite Order of Assassins.

Ezio must avenge the deaths of his kinsmen and in doing so fulfil
[sic] his destiny, and live by the laws of the Assassin's Creed.

Truth is written in blood.

Oliver Bowden is the pen-name of an acclaimed novelist.[2] 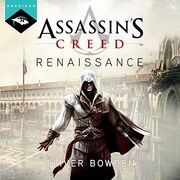 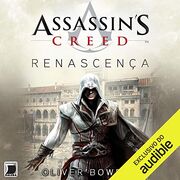