Assassin's Creed: Prophecy of the Emperor

Assassin's Creed: Prophecy of the Emperor

Chinese
Assassin's Creed: Prophecy of the Emperor (刺客信条: 大唐秦王谶, Cìkè Xìntiáo: Dà Táng Qínwáng Chèn, lit. "Assassin's Creed: The Great Tang Prophecy of the King of Qin") is an upcoming Mainland Chinese novel by Sui Shi. It is the first novel in The Imperial Jade Seal series to be published by Starfish.[1] It is expected to release on 25 March 2022.

China, Tang Dynasty, during the reign of Empress Wu Zetian. Zhangsun Qi is a 16-year-old girl who has been trained in martial arts since her childhood by her master, the Princess of Gao Chang [sic] Kingdom. She is soon sent on a crucial mission: finding and securing a powerful Piece of Eden, the Tui Bei Tu. This quest puts the young woman in the middle of a wider conspiracy, as her own uncle, Zhangsun Wuji, tries to manipulate her to murder the Empress Wu Zetian. She will have to stick to her values and understand the true nature of Tui Bei Tu to save China.[1]

When details on the book first emerged on 22 April 2021, it was initially titled Assassin's Creed: Prophecy of the Emperor (刺客信条：大唐秦王谶, Cìkè Xìntiáo: Dà Táng Qínwáng Chèn, lit. "Assassin's Creed: The Great Tang Prophecy of the King of Qin"). On 9 March 2022, the publisher Starfish announced in a news post[2] and on the Chinese video site Bilibili that Ubisoft had changed the title to 《刺客信条: 长安望》 (Cháng'ān Wàng).[3] Ubisoft has not yet updated this information on their official website.[1] The same day that Starfish announced the title change, author Sui Shi stated on the Chinese microblogging platform Weibo that select preorders before the book's release would include limited signed copies, alternate dustjackets of Qi in orange or blue, exclusive collectable cards featuring Qi and the Assassin insignia from the three games with modern day protagonist Layla Hassan, a poster of the book's initial cover art, or a miniature colored cutout of Qi for display.[4]

Back of Qi's character card 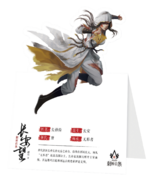