Assassin's Creed: Origins is the tenth main installment in the Assassin's Creed series developed by Ubisoft. The game was released worldwide on October 27, 2017.

Ubisoft Montreal is the lead development studio on Origins, with the team comprising many of the people that previously worked on Assassin's Creed IV: Black Flag. Ubisoft Sofia, Ubisoft Singapore, Ubisoft Shanghai, Ubisoft Chengdu, Ubisoft Bucharest, Ubisoft Kiev and the Sperasoft studio are also collaborating on the development of the game.[1]

Due to the setting being further back in time than previous entries in the franchise, history books did not always suffice as reference. To compensate, Maxime Durand worked closely with various historians and Egyptian experts to fill in the blanks where needed. In some cases, the lack of reference meant the Art team had to create the look and overall feel of what Ancient Egypt would have been like at the time.[1]

A new Artificial Intelligence framework was also created from the ground up, since the developers wanted the non-player characters, both human and animal, to have their own agenda and activities. Full day cycles were created to make the world feel dynamic and alive.[1]

To refine how the game displayed colors, the team designed a new color-grading feature to help them create specific and unique color ambiances. They also used satellite images of Egypt to fine-tune the colors for the ground and the vegetation and make them as realistic as possible.[1]

Another visual aspect that received a lot of attention was lighting; the developers studied technical documentation from NASA to better understand how airborne particles impact lighting. Similarly, they looked at the ways in which different sediments refract light to realistically depict different types of water, which can communicate to the player what kinds of wildlife they might encounter in it.[1]

The story takes place during Cleopatra's ascent to the throne in 49 BCE and centers around Bayek, the last Medjay, after he has left his native village of Siwa to pursue a certain mystery. This journey will lead him to travel across Ancient Egypt as the country experiences a shift in power, and play a role in the birth of the Assassin Brotherhood.

A new force called the Order of the Ancients is controlling Egypt through Ptolemy XIII's rule. Ptolemy XIII is the younger brother of Cleopatra and is referred to as 'the Boy-King'. Cleopatra and Bayek need to stop his rule which they do with the help of Julius Caesar.

The game will include modern day elements, which will run along their own storyline.[2]

Origins’ map encompasses Lower Egypt and eastern Libya, which can be explored seamlessly without encountering loading screens, and has been described to be "the size of Black Flag’s Caribbean, but on the ground".[3] Players will be able to visit major cities such as Giza, Memphis, Cyrene and Alexandria, as well as various smaller villages and settlements in Faiyum and the Nile Delta.[1]

Unlike previous Assassin's Creed games, Origins will have no mini-map, instead employing an Elder Scrolls-esque compass bar that points the player in the direction of quests and objects of interest.[4] Senu, Bayek's eagle companion, functions as the game's "Eagle Vision", being used to detect and mark enemies. The aerial perspective she brings also allows players to locate treasure chests, crafting resources and hidden passages. As well as this, Senu can be upgraded to distract or attack enemies.[5] Using Senu will not defog parts of the map, this will require the player themselves to step into the fogged area of the map to defog it. Interiors are accessible, and the Library of Alexandria is available for exploration.[6] Although it will not feature the traditional "Eagle Vision", it will feature "Animus Pulse" which will only highlight objects.

As a result of Senu's introduction, viewpoints are no longer primarily used to reveal information about an area and its surroundings. Instead, they serve as a way to increase the eagle's detection capacity.[5] Synchronizing a viewpoint also allows the player to fast travel to it, a mechanic that has carried over from previous games.[4]

Underwater environments return from Black Flag, with players now being able to dive in any sufficiently deep body of water to explore wrecks and underwater ruins in search of loot. Since hostile animals such as crocodiles and hippos inhabit these waters, an underwater melee combat system was also created. In terms of transportation, Bayek can use feluccas to traverse the water, and horses, camels and chariots to travel on land.[4][7]

In addition, there are 20 tombs to explore; some of these are based on real-life locations, while others are fictional. The tombs will contain traps and some light puzzles, but they are, at their core, more about exploration and uncovering treasure.[3] To navigate these darker spaces, Bayek can light torches and even set things on fire.[8]

Much like Syndicate, Origins features a progression system where completing certain actions earns the player experience. Leveling up not only makes Bayek stronger, it also grants ability points that can be spent to unlock skills from the game's ability tree. There are three main branches in this ability tree:[1]

In addition to skills, there is a full crafting system, based on materials gathered through hunting, which can be used to improve Bayek's equipment, such as the Hidden Blade. This is necessary when assassinating higher level enemies, which will not die from one blow if the Hidden Blade has not been sufficiently upgraded.[1]

Origins also moves away from the mission structure of previous entries in the franchise, instead utilizing quests that the player has to pick up in the open world and can then pursue at their leisure without desynchronizing.[4]

Desert Overheat is another RPG element being introduced with Origins. Essentially players can develop heatstroke due to being in the desert for too long. The system introduces varying effects depending on the severity of Desert Overheat.[9]

The combat system was completely overhauled for Origins, now utilizing a hitbox system. As a result, positioning, as well as the size and the speed of the equipped weapon, determine whether or not an attack hits. In addition, while a heavier weapon like a mace might deal a lot of damage per strike, it can leave the player open to more counter-attacks than if they were using a light sword. Players can also use Bayek's shield to block enemy attacks or bash opponents to create an opening.[1]

In addition to a revised combat system, there is a new Adrenaline Gauge that builds up energy during combat, giving the player the ability to either unleash devastating finishing moves on their enemy or make Bayek enter a frenzy, during which he is temporarily faster, stronger and more resistant to damage.[4]

Origins features a variety of weapons, including swords, bows, heavy weapons, long weapons, bombs and shields. In total, there are over 150 weapons in the game, ranging in rarity from "common" to "legendary", that all have pros and cons within Origins’s new combat system. Some weapons also have specific attributes, such as a larger chance to deal critical damage or bleed properties.[1] Unarmed melee combat also makes a return from Assassin's Creed: Syndicate.

The game will also include boss fights against formidable warriors and strange creatures.[4]

Some features that had been frequently requested by the fanbase were introduced into the game: players will be able to toggle Bayek's hood on and off in the menu screen and multiple save files are making their return after having been absent in Assassin's Creed: Unity and Syndicate.[10] Players can also fast forward to a particular time of day;[11] tackling missions at night, for example, means some of the guards will be asleep, allowing Bayek to sneak through without attracting much attention.[4]

Origins is primarily a single-player experience, but the game will include online features to enhance that experience.[12]

An additional singleplayer mission, Secrets of the First Pyramids, is available via pre-ordering the game. The Deluxe Pack, included in the Deluxe Edition of game, will give access to the Ambush at Sea mission, 3 bonus ability points and the Desert Cobra Pack.

Legacy outfits, outfits worn by previous Assassin protagonists, will also be available for use in the game.[6]

Ubisoft has also announced a Season Pass, which will include the Calamity Blade weapon and the following content:

More singleplayer DLC that will be added post-launch includes:

In addition to the post-launch DLC, Ubisoft has also announced the following content and activities that will be available to all players: 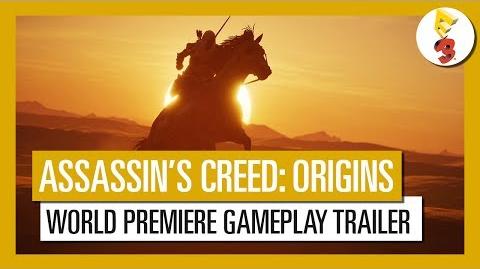 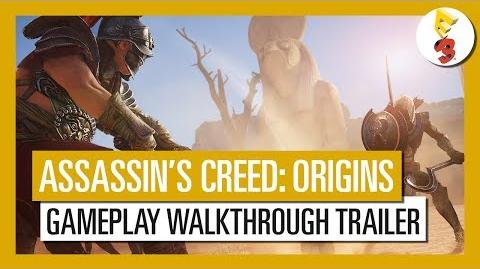 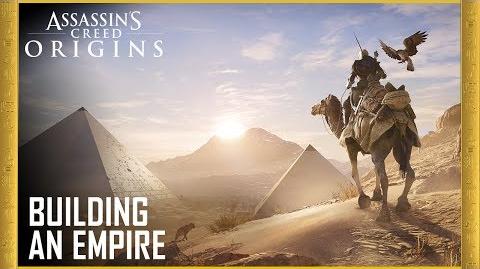 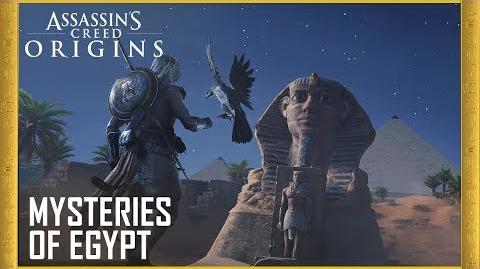 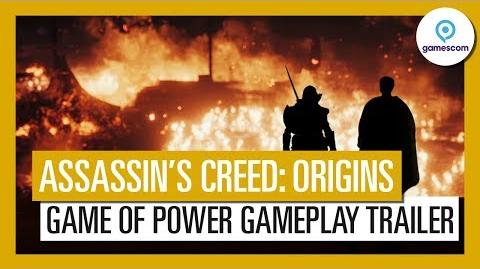 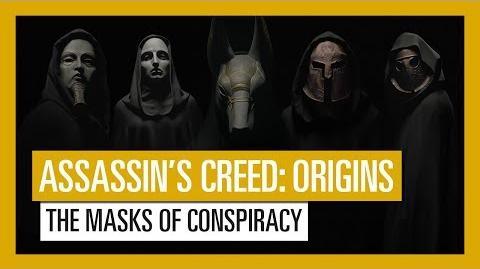 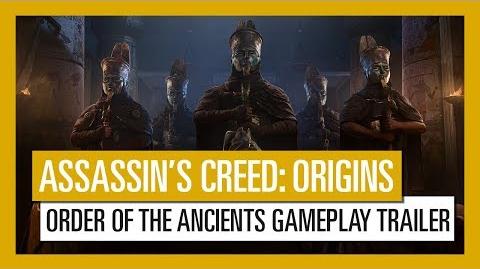 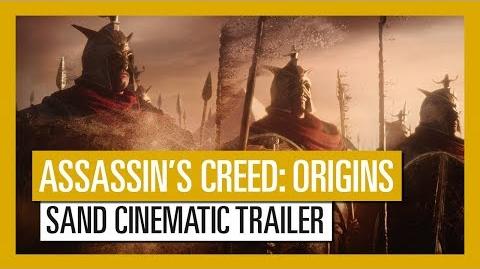 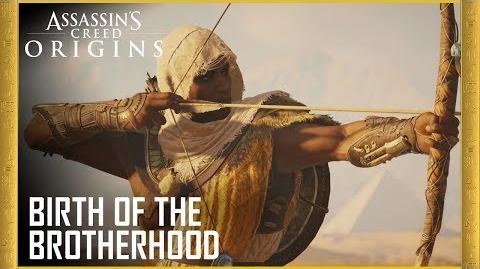 Assassin’s Creed Origins Birth of the Brotherhood Trailer Ubisoft US 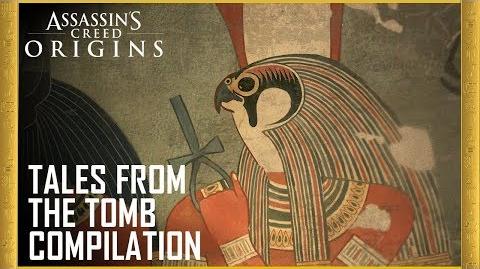 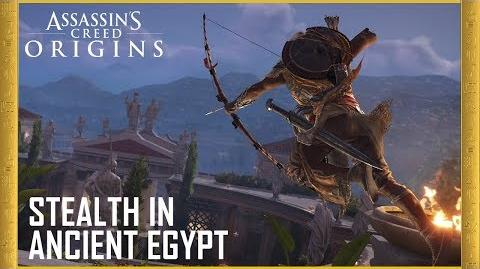 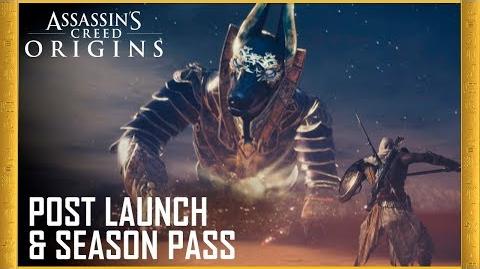 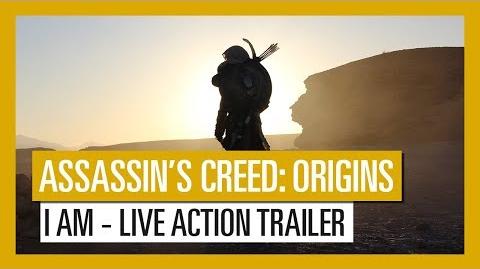 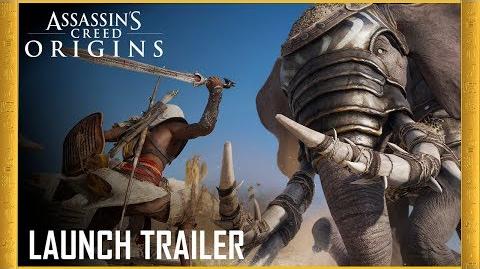 Alexandria in the distance

Ruins in the Nile delta

Bayek on a dromedary
Add a photo to this gallery

Retrieved from "https://assassinscreed.fandom.com/wiki/Assassin%27s_Creed:_Origins?oldid=713121"
Community content is available under CC-BY-SA unless otherwise noted.